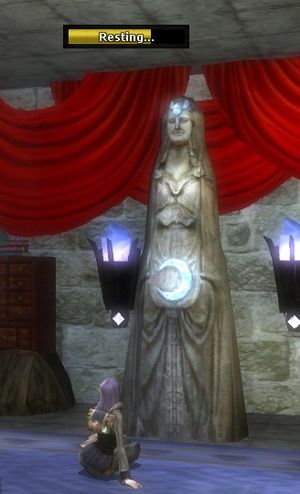 Rest shrines are tall monoliths with a blue symbol found in quests and wilderness adventure areas that will replenish:

It also resets the death penalty.

Rest shrines can be used only once in quests on Hard and Elite settings, once every 15 minutes on Normal and in wilderness areas, and once every 5 minutes on Solo and Casual.

Resurrection shrines are tall monoliths with a red symbol found in quests and wilderness adventure areas that can be used when dead in order to resurrect with a tenth of one's maximum hit points and whatever spell points they had at the time of death. Note that you will suffer a temporary negative level due to the death penalty.

Resurrection shrines can be used as often as needed. A dead character's Soul stone must be within 10 seconds of walking distance to the shrine in order to use it. If this is too far, another (living) player character (or hireling) can pick up the stone and carry it.

In order to Resurrect a hireling, you must be holding its Soul stone in your inventory, target the shrine, and then instruct the hireling to interact with your target. They will then be resurrected. 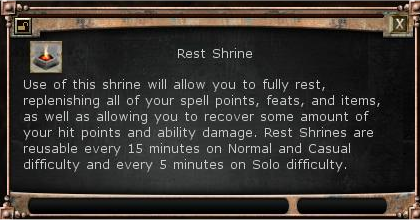