Reaper Difficulty or Reaper Mode, introduced in Update 34, is the highest difficulty in DDO. This game mode has ten sub-difficulties, known as "skulls," that can further increase the challenge rating. In this difficulty, many things are changed, so proceed with caution! Most notably, self healing in reaper mode is significantly reduced. Players will also find that they do less damage and take more of it, including attribute damage. There are special monsters only found in this game mode known as Reapers (see below) which have dangerous, powerful abilities. As a reward for braving this difficulty, players will earn more experience points, more named treasure (with increased chances Mythic Bonuses and exclusive chances for a "Reaper Bonus"), and Reaper Experience, which unlocks Reaper enhancements and cosmetics.

Reaper Difficulty offers a new challenge for the toughest adventurers! Reaper difficulty can be selected from the quest portal UI for many quests and raids throughout the game. When you select Reaper difficulty, there is also a drop-down list of between one and ten Skulls, which affects quest/raid difficulty and reward. Special Reaper Bonuses can be found on items acquired in Reaper Difficulty, there is an increased chance to get named items, and you'll earn Reaper Experience. Reaper XP will award a Reaper Point at certain thresholds that can be spent on abilities in a special Reaper benefit tree, among other things! Warning: Reaper difficulty is meant for players who enjoy a serious challenge. You have been warned!

Reaper is the fifth difficulty setting for quests, above Elite. Further, Reaper allows players to decide how much of a challenge they want by selecting an appropriate number of "skulls" (1 Skull = easiest vs 10 Skulls = hardest), adding further difficulty if the player so chooses.

A quest can be opened on Reaper difficulty by any character who can open Elite difficulty. This means VIP accounts can do so at any time, but Free-to-play and Premium characters must have already completed the quest on Hard, or have reincarnated at least twice (same as opening for Elite difficulty), or are in a party with a member who can open on Elite. (There is a level gate in effect, see Lockout below.)

The following applies to reaper mode: 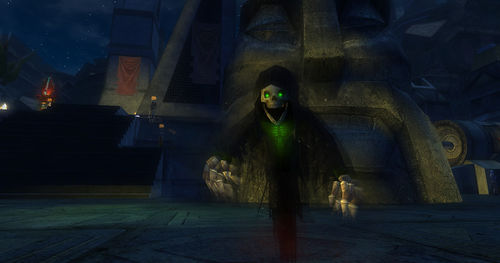 Despair Reaper
Orange named
This reaper will engage in melee. However, it also applies despair debuffs to the target player from far away.
Has a permanent aura circle effect that boosts saving throws.
Has a buff Cloak of Despair: Cloaked in your despair this reaper has great advantage to their saving throws.
Periodically applies a stacking effect to everything in the circle that buffs damage of monsters and debuffs damage of players. Both stack up to 5 times and have message text reading: "Your enemies grow stronger as you despair."
Seen in R5 and above.

Vengeance Reaper
Orange named
Mostly a melee combatant on line with Fear Reapers, although thought to cast spells on occasion
Spawns blue circles that explode in a few seconds for extremely heavy Evil damage
"Explodes" on death, buffing all enemies around them (they deal greatly increased damage)
Message on buffed enemies: "They Carry My Vengeance - This creature's offense has been greatly increased by Vengeance"
Seen in R5 and above.

Doom Reaper
Red named
Can use Binding Chain
Applies a stack of "Marks of Doom" on hit, with each stack greatly increasing damage taken DDO Forums
Seven stacks of this effect will instantly kill the target with no save
Seen in R6 and above. 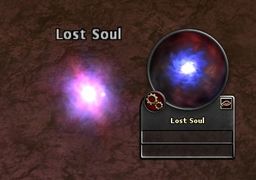 NOTE: RXP is only awarded when at least ten enemies are defeated in a quest. Killing 9 or fewer enemies still gives regular XP with bonuses for Reaper difficulty, but yields zero RXP. DDO Forums

Starting at Level 4, Reaper Points can be invested in any of three Reaper enhancement trees. There are 3 trees available, which are essentially:

The base RXP reward (displayed at the top of the experience log) is the based on dungeon level and the number of skulls selected.

This base RXP number is then multiplied by a quest length modifier before being used in any following calculations.

The final RXP total (displayed at the bottom of experience log) is modified in exactly the same way as "normal" xp is modified with the following exceptions:

These boosts are not reflected in the Experience Report for the quest, but are instead calculated based on the entire amount of XP gained from the quest and reported in the chat window upon completion.

A character continues to acquire RXP when capped for heroic or epic experience (i.e. after reaching the XP banking cap or level cap, quest completions will continue to award RXP).

RXP persists through reincarnation, but must be re-allocated once a character hits Level 4 (or higher).

For Heroic quests (only), there is an RXP over-level penalty. Since Update 42 Patch 4 the penalties are the same as for regular XP - namely, if the highest level player is four levels over the quest's base level, they are 2 levels over the effective level, and a 10% XP penalty applies to all characters. Further penalties are impossible, as characters five levels or more over the base level are locked out.

There are no overlevel penalties in Epic quests, just the six level lockout. (test)

Note: The over-level penalty also applies to hirelings, including gold seal hirelings. A particularly punishing example is summoning a level 20 hireling, such as the Onyx Panther (ML18) in heroic reaper. This prevents all RXP. DDO Forums

Such characters can still enter epic reaper dungeons but get 0 reaper XP.

As of Update 34 Patch 2, RXP is modified based on the length of the dungeon/raid:

Reaper Vendors are available in the Hall of Heroes. They sell Creature Companions and potions that grant special cosmetic feats.

Very high totals of Reaper Experience are rewarded with special cosmetics or a creature companion. There are three different vendors, each with a different Reaper Experience requirement that must be met before they will talk with you. The platinum costs are high; buy these items when you have high haggle.

Note that the eyes and wings last for a single life and need to be purchased again after you TR.

The contents of chests and end-loot, including the presence of named items, have (slightly) improved chances of better results on Reaper difficulty, often with higher reaper difficulty (aka "most skulls") resulting in slightly higher percentages of that better result.

Certain quests are not available on Reaper difficulty:

Note: Hound of Xoriat and its legendary equivalent were disabled on reaper difficulty in Update 41, and later reinstated in Update 42 Patch 4.

Prior to Lamannia Update 33, Reaper Mode was a whiteboard idea for a dungeon difficulty harder than elite in development internally and mentioned to the Player's Council. Some of its simple text leaked onto the Lamannia preview server while Update 27 was being previewed.