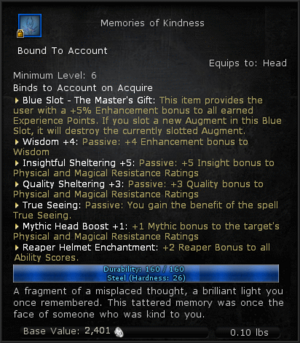 An item with Mythic and Reaper enchantments

Named chest loot from quests run on Reaper difficulty has a chance to gain an additional enchantment called a reaper bonus. Introduced in a recent update, ALL players, regardless of reaper experience, can talk to Raven Queen Augur and crunch down reaper bonuses on specific items in the Reaper Forge.

The following bonuses can appear on any Named item:

Named items can instead get a special slot specific bonus:

Rings can have a number of various effects with special bonuses:

With the exception of the helmet, slot specific bonuses were added in Update 52.

All reaper bonuses fully stack. Update 53.1 corrected stacking of rings and other new Reaper enchantments. An item can have both a reaper bonus and a mythic bonus, although this is very rare unless the bonuses were added manually (by either the Reaper Forge or Slave Lords Crafting/Schism Shard Crafting.)

Warning: Some upgradeable items might lose their reaper bonus when upgraded, for example via Epic Crafting or Cannith Crafting.

Reaper bonus occurs on about 5% of eligible items in reaper mode, with a very small chance to occur in conjunction with another bonus. (Sample size: 211 items. Data source: Google Sheets)