Long ago the Giants who lived on this island commanded their Drow slaves to build this vault. The vault has lain hidden and unopened until quite recently. 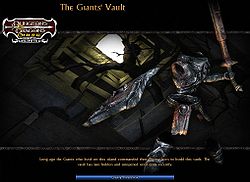 In order to repair the Stormreaver's Interdiction Lens you will need to retrieve a piece of Aspect Crystal.

Murkeletter believes that the ancient giants had a vault where they may have stored these crystals long ago. The Giants' Vault is on the Isle of Forgotten Dreams.

To enter the final Dreaming Dark quest in this chain, you may choose to enter this adventure as a solo player, or run Mining for Ancient Secrets as a party to repair the Interdiction Lens to complete the third of three quest flags required.

Fixed on center pedestal, fatal until disarmed by levers throughout the quest (mandatory); Rogue skills not required

You begin the quest falling down a long shaft, safely toward a pool of water. The quest lies the direction you are facing (south), and if you have Feather Falling on at the start, you can land at the water's edge. Ahead is a small amount of resistance as some Inspired try (unsuccessfully) to disarm the traps atop a central pedestal in the main room. Watch out for the Inspired mage's level-draining attacks and kill off your competition.

Do not attempt to run up the central pedestal before finding the levers to disable the traps! There are no trap Control panels; there will be a lever in each of the east and west upper hallways, guarded by a boss: Lone Warrior's Armor. Once both levers are thrown, the traps along the central pedestal will be deactivated. All 3 chests are locked; the central larger Chest and the northern Small Chest can't be picked (the southern Small chest's lock can be picked by a Rogue). The key to unlock them is only found after the end of the quest (through the lower western door) so don't be impatient, first things first.

There are several fire mephits high in the main room shooting fireballs, and they tend to hover above you, making it difficult to target them. Take them out sooner rather than later. You will also meet animated armors as you climb, but those are each lone enemies.

There are multiple hallways from the main room, but most are elevated (and the west ground-floor one is barred by a Locked door), which means you'll need to climb a lot, occasionally jumping across or down to other paths. Along the walls in the main room are also a total of 'six runes' you can use to activate two "air jets" to carry you upwards. The air jets are in the water and look like crystal gems, with steam rising from them when activated, one is west of the trapped central pedestal, and the other east, making it easier to return to the upper ledges should you fall. Or you can ignore them; risking falling and having to climb back up.

It may be fastest to reach the upper western tunnel and lever first; take the small ramp up to the southern hall, past and double back over it (i.e. keep climbing up the stonewall blocks in the main room). Going counter-clockwise one full lap, until you pass just under the western tunnel entrance (very high up) and can climb up and back and drop down to it safely.

NB: You can clear out that "dead end" southern passage now if you want or ignore it for now; it only contains a few enemies, and you will come back to it on your way back to the main room.

The upper western tunnel leads to one of the levers at a dead end.

Return the way you came, and you can then jump to your right (counter-clockwise), across to a second easy jump to the eastern loop, which then eventually ends with a drop into the southern tunnel.

The eastern hallways loops around; at the shrine, go south and pull the second lever. In the pool west past that is the Iron Key to the door for the western ground-floor hallway. (Note: if you are not interested in optionals or loot, just return the way you came now.)

At the end of the loop there's a long drop back down; if you push west (the way you are facing) as you feather fall down, a side-tunnel leads further west, blue crystals on some of the western blocks hint where that elevated hidden side-tunnel entrance is. The west side-tunnel leads to a rare gargoyle that may spawn (you'll get a narrator's announcement if it's there: "You make out a moving shadow in the shaft below."). Finally, you will land at the far end of the southern hallway. If you did not clear out the lower level "dead end" south passage before, you'll find some fire mephits immediately below you, and then the last few animated armors as you return to the main room.

The Iron Key from the pool opens the lower, ground-floor Locked western door. There is one last fight with a stone golem,* and the Jeweled Key is yours; opening the larger Chest unlocks all 3 chests, with no more opposition to worry about. Opening the larger central chest also completes the quest.

* The golem does not need to be fought for the jeweled key. There are two translucent blue "doors" which block the key, but these can be opened with the right positioning and using the keys q , then e, and the lever which opens the golem's door need never be pulled.