Hazadil is widely reputed to be a smuggler and a criminal, but for some reason the City Guard refuses to intervene. 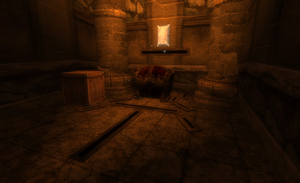