Misery's Peak... the very name dampens resolve and bodes ill of things to come. What few return from this place are broken, twisted, deranged slaves of the Devourer. Will that be your fate? 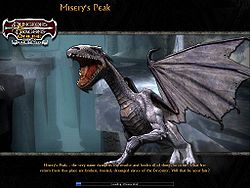 Lars Heyton has a plan to rid Korthos Island of the ice dragon that's been besieging it. You are to meet Amalgam at Misery's Peak, the snowy mountain deep in the Korthos Island wilderness outside of the village.

For many, both new players and vets who have not run Misery's Peak in a while, the narrow trails in the large spider-filled cavern can easily get confusing. This is an easy route:

1) When you get to the sealed door at the southern end, take the ramp up. At the top, double back to your right (south-ish), and deal with the first zombie battle and floor rune.

Hint: These runes, when activated, will send a beam of light across the cavern to the door they relate to.

2) Continue south, past the next ramp up (either side), to activate the next battle and floor rune near the cliff edge.
3) Double back up that last ramp. That path will send you winding counter-clockwise around the upper part of the cavern wall, to the next zombie battle/floor rune, the purple crystal door, and the next shrine.
4) Just keep following that path counter-clockwise, to the last zombie battle. The path gets dark in places, but it's there.
5) When the path leaves the side of the cavern, it splits downward – veer left, to where you see the orange crystal room. Another lever (but no shrine). If you don't want the Spider optional*, jump down (use Feather Fall) to the ground level and continue going south in the tunnel – the sealed door should now be open.

* For the optional mini-boss spider Frostbite, double back up to where the path split and get back on the path counter-clockwise to the green crystal room. There you'll find the only chest in the quest, and another shrine. Jump down – you know which way to go from here.