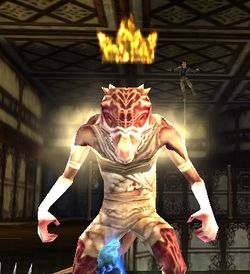 Burning crown identifies a monster champion; the color of that crown signifies how dangerous they are.

Introduced in Update 24 and reworked in Update 34, some enemies gain randomized buffs on Hard, Elite, and Reaper difficulties in quests with an effective level of 5 or higher (i.e. starting with level 4 quests on Hard difficulty, and level 3 quests on Elite or Reaper). These enemies are called Champions, and they have a visible crown above their head to mark them. Monster Champions do not directly spawn in any raid (the champions in Legendary Shroud's Part 5 are granted champion buffs but are not champions proper), nor do they appear at all in any wilderness area or quest on Solo, Casual, and Normal difficulty.

Not all champions are alike - some are tougher, some are a lot tougher, and any can have different abilities (see below). The more dangerous champions are only encountered in the higher difficulty settings, and low difficulty will have no champions.

The color and size of a champion's crown designate whether the Champion is Tier 1, Tier 2, or Tier 3:

When defeated, champions have a chance to drop Mysterious Remnants

Champions come in 20 different varieties, and it's random which type will be applied to any one champion. Each variety will have their own template of abilities based on a theme (inspired by the Outer and Inner Planes where they get these powers). Players can see the kind of Champion they are facing by looking at the creature's title, and additional detail can be found in the examination window.

Note that many* have True Sight, making such common tactics as Invisibility ineffective against them.

(* 7-8/20 of yellow-crown champions, 10-11/20 of orange-crown, and 15-16/20 of red-crown; note that Mark of Chaos champions are largely randomly generated, and it is unknown what percentage chance they have for this ability, potentially adding a full +1 to the minimum listed values.) 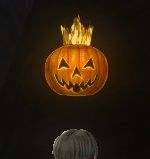 During the Halloween event, Champions crowns show a little jack o'lantern under the usual crown of fire.