RR allows the character to be reborn as a more powerful incarnation, providing:

RR is available, after level 20, to all characters who are not currently Iconic Heroes 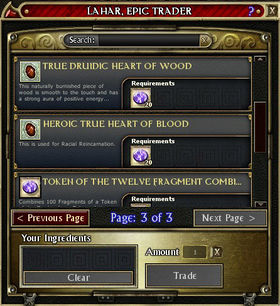 Tapping into memories of their former selves, Racial Reincarnated characters will receive additional build points to spend during character generation, as well as unique bonuses in the form of access to Racial Past Life feats. Each reincarnation will also upgrade the character's status on their examine window (to Hero for second-life characters and Legend for third life characters and beyond), and the character will be slightly physically larger than previous lives. Also, TRed characters have a blue lighting effect that surrounds their body upon log-on and zone-in.

RR allows players to relive their journey through Stormreach. Characters will:

RR benefits are identical to those of Heroic Reincarnation other than Past Life Feats, and do not stack (i.e. 2 TRs will make you 5% taller whether they are Heroic or Racial. 2 Racial TRs and 2 Heroic TRs will not make you 10% taller).

The Racial Past life feats are listed below; the "1st" column shows the bonus received for the first reincarnation, the "2nd" for the second reincarnation of a given race, etc. The 3rd reincarnation is always +1 Racial Action Point, applied to your current racial Enhancement tree (including Iconics).

All accrued bonuses are applied at Level 1 (i.e. immediately after character creation). Bonuses to attributes change the final, but not "base" value; i.e. they do not count for Feat prerequisites, bonus Intelligence does not count toward Skill Points, etc. source

More than 3 Racial Reincarnations with the same race adds no further bonuses.

* Warforged are not available to starting accounts, however they are available "for free" once any character on that server earns 400 favor. Warforged and all non-Free-to-play races can be bought in-game via the DDO Store.

So, besides starting with 36 build points, a racial-completionist (three of each race) would enjoy +4 to Dex, +3 to Cha; +2 to Con, Int, and Wis; and +1 to Str. They would also receive a bonus of 14 Racial AP, as well as the +2 to Spot and Spellcraft and +1 bonuses to the other listed skills - plus the benefits of the Racial Completionist Feat (i.e. +2 to all ability scores and +2 to all skills).

Skill upgrades from Racial Past Lives with Racial Completionist

* 0.5 skill bonus is included to represent odd ability scores, but will not be granted in-game.

Once a character has completed all 3 Tiers of reincarnation on all current races, a free Racial Completionist Feat is awarded to all future incarnations

If additional races are added, this Feat is deactivated and the character will need to acquire those new racial past lives before it is reactivated.

Some notes about True Reincarnation: