Drow elves are basically similar to all other elves (Aerenal, Valenar, or Khorvaire). DDO has released them as a separate race, although they share several racial traits and enhancements with elves.

Drow originally started as a premium race. It was made free in Update 53.

Note that unlike any other race, the Drow race does not use the standard 32-Point-Build (once you have that unlocked). Moreover, when you choose Drow after a reincarnation, you will only be given 30 Points on the first and 32 Points on every subsequent true reincarnation. 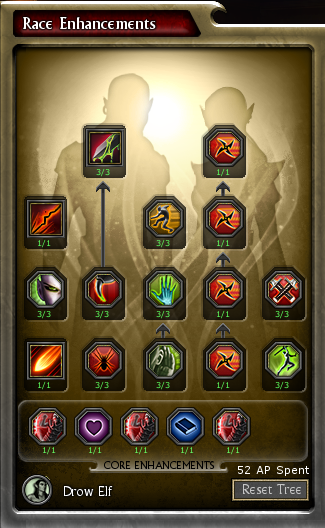 History of the Drow Elves[edit]

Approximately 39,000 years ago Elves were slaves to the Giants of the Xen'Drik continent. After a war with invaders from the Plane of Dal Quor nearly ruined the Giant's civilization and wrecked the continent, the elves rose up in rebellion against the giants. Many fled Xen'Drik, landing on an island continent they named Aerenal.

The elves that remained on Xen'Drik became known as the drow elves. Delving deep underground or wandering the lush jungles of the continent, the drow became more powerful than their blood brethren, and yet more distanced from and distrustful of from the cultures of friendly races.

Drow elves stand between 5-1/2 to 6-1/2 feet tall, and typically weigh between 95 and 135 pounds, with only marginal differences between men and women. Their skin tends to be so black in color it may appear to have a bluish or purplish sheen; in contrast, their hair is almost always a brilliant, shining white. The colors of drow elf eyes range generally from maroon to bright red, though some drow elves have been noted to have an extremely light pink close to the color grey or even completely white eyes; if this is a sign of power, or some strange trait carried through the bloodlines of drow families, none can tell the answer. Neither males nor females grow any facial or body hair, apart from that on their heads and scalp. An elf is considered an adult about 110 years old, and can often live to be well over 700 years old.

Elves do not sleep as other races do. Instead they meditate, descending into a trance-like state that lasts for about four hours each day, which is equal to around 8 hours of sleep for the other races. This lack of sleep gives all drow and elves a natural immunity to sleep and clouding of the mind due to weariness cause by lack of sleep, whether the urge to rest be brought on by magical or more mundane forces.

Drow elves can be found in virtually any part of Xen'Drik. They are semi-nomadic, traveling through the jungles of Xen'drik and searching old ruins for anything that can help them survive; this often gets the drow wanderers into scuffles with the leading religious powers, especially The Undying Court, which is purely elvish by heritage, apart from the fact that elves already hate drow and vice versa. When not living in the ruins of ancient giant cities, they are often living underground in the various cave systems.

Drow elves that have escaped to the surface are typically semi-nomadic and secretive, distancing themselves from common society. Thus, they have not really established any lasting "realms", and have created no government or ruling power as of yet. However, the realms below the ground are as dark as their pitch-black surroundings, consisting of frequent fighting, assassinations, and betrayal to gain power.

Drow elves are not known to carry any dragonmarks. As dragonmarks are usually signs that the possessors play a part in the Prophecy, this does not bode well for the future and importance of the drow in later times. Whether this is due to the Gods' lack of attention to the drow, or the fact that the drow have not yet found and harnessed the powers of hidden dragonmarks, none can say.

However, there have been drow elves who have been looked kindly upon by those from Above; these "favored souls", as they are often known as, are living proof that the drow are not entirely excluded from the designs of the powerful deities, and so the drow may yet prove to gain one of their own dragonmarks.

Surface-dwelling drow elves live and travel in small family tribes or bands. They have little interaction with other bands of drow elves, and even less with outsiders. They consider themselves to be the true preservers of elven dignity and valor and consider the elves that fled to Aerenal to be cowards.

Drow elves dwelling beneath the ground in the lack-light caverns generally live in small realms, almost like kingdoms; however, drow must always watch their backs at all times, as the underground drow society is a brutal, bloody system of constant struggles for power. The children, from the moment they can defend themselves, are expected to do so, receiving little help from their parents or from other drow. While this forces the drow to become more cunning and smooth-tongued in order to survive, this also grants them a general distrust of all other sentient beings, even those who are not drow.

Drow often worship a scorpion god called Vulkoor, often depicted with the lower body of a scorpion and the upper body of a drow. The drow of Menechtarun are believed to especially do so, to the point that they are sometimes addressed to as the Vulkoorim. They revere all types of scorpions and consider other arachnids to be lesser servants of Vulkoor. Many researchers believe that Vulkoor is an incarnation of the Mockery. Many religious drow scar themselves using scorpion venom to leave white scars on their black skin.

However, drow are not limited to this dark divine ruler; plenty of drow have been able to serve as pious clerics or noble paladins in the name of the Silver Flame or the Sovereign Host, among other, much lighter deities than Vulkoor.

Drow elves are generally more cunning and charismatic than other "typical" elves, able to think faster on their toes and intimidate or sweet-talk other beings in a more fashioned manner than the other elves; this does not indicate that they are any wiser. They most likely gained their heightened physical prowess from their conflicted and blood-filled history serving time as giantese slaves or waging war against their captors. However, they are not as skilled as their kin in the use of ranged weapons such as the longbow and shortbow, preferring the use of light melee and throwing weapons including the short-sword, rapier and shuriken (in pencil & paper, the Drow use a three-pronged boomerang instead of shuriken). Drow elves are equally dexterous and frail as their blood brethren.