Shifters are a basic Eberron race with notable Lycanthropic ancestry. They cannot transform entirely into animals, but can shift parts of their bodies to be animal-like for short periods of time. In DDO, this Shifting has similarities (and statistical connections to) Raging.

Depending on subrace selection, Shifters excel at Defense/Tanking or WIS-based casting.

Also available as part of all Fables of the Feywild bundles.

1st Level Racial Feat: Subrace Selector. (Like Aasimar, Shifters select their subrace at level 1, which grants them some specific bonuses and informs which selections they can make in their tree).

Shifting is very similar to Barbarian Rage, and as such, it prevents the use of the Precision feat and some defensive stances (stalwart and sacred defender). 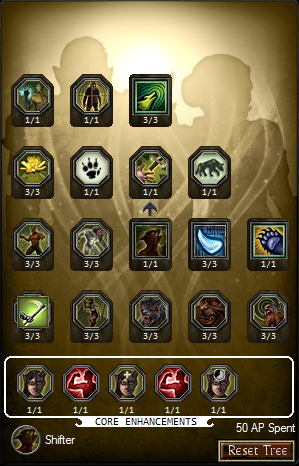 Shifters are often rather warlike and xenophobic, although this is not a rule. They typically live in packs, but loners are not unheard of. They tend to stay away from civilized areas and keep to themselves. They fiercely guard their territory and do not welcome outsiders. They run the gamut from kind-hearted to cruel and ruthless. Shifters usually are 'VERY' good at fighting. Shifters do not enjoy using weapons although if it is necessary they will. A Shifter's favored class is any; this is probably because they are better at attacking with anything they want, and another factor is that they have the "Change Shape" ability.

Shifters, also known as the weretouched, are a descendants of lycanthropy-cursed individuals. Shifters are known for their ability to act in a bestial or close to nature manner, doing such things as running on all fours, climbing trees, and fighting with bare claws or teeth. Their sense of smell is also heightened, when compared to humans; but they are suggested to have worse social manners, as a race, because they are used to living 'wild', outside of the villages most people settle in. In terms of genetic derivation, they are commonly thought to be the result of crossbreeding between humans and lycanthropes but have become a true-breeding race and in human form they are anywhere from 5'3" to 6'3". Their animal form will determine their build. I.E. A falcon will be slender and light, while a bear would be large and muscular. The color of their fur or feathers will also determine the color of their hair and skin color. Their eyes will start at blue when born but can turn purple, green, or yellow as they grow. They will remain the same in their animal form and when they get older they learn how to access their shifting abilities and transform into "more powerful races." Their lifespan is about 750 years and reach adult hood at age 50 unless they learn how to control their shifting.

Shifters survive in a wide range of habitats, and can be found in tundra, desert, forest,and cities, But most stick to the woods or mountains where their animal form is plentiful. Also where they live will determine possible animal form. Loners tend to roam where they will, not caring where they are so long as they are on the move. But once a Loner leaves the pack they are not always welcomed back. They are seen as having turned their backs on the pack and shunned.

Shifter is one of Eberron's races.