Half-Elves are a cross between humans and elves, so Half-Elves have a good blend of human versatility and elven sensibility and have access to both race's enhancements and racial-specific equipment. Half-Elves don't have a favored class, they can do well in any class and are also naturals at social interaction and can use social skills more often than the other races, an advantage in managing the battle and assisting their party. They may also dabble with an additional class ability using the Dilettante feat, making them even more diverse and self-sufficient.

Originally a premium race, Half-Elf was made free in Update 53.

Dilettante feats are special feats available to Half-Elves. They enable a Half-Elf to garner some of the abilities of another class other than the class they have chosen. A Half-Elf can choose any one of these feats he or she meets the listed requirements for at character creation.

Along with various bonuses, you, with these feats, count as a level one of the class for item use purposes (class restricted items, scrolls and wands). These feats are not recommended for characters with actual levels of the class. 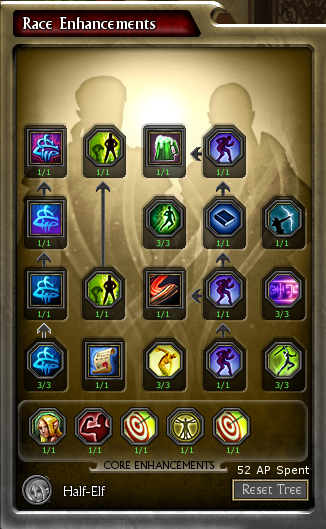