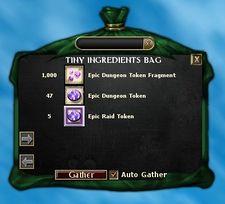 The varieties of Tokens of the Twelve (prior to Update 17). The names are now changed (see article), but the icons are still the same.
(Mouse-hover for pop-up) 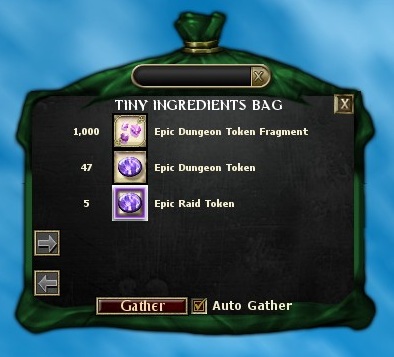 Tokens of the Twelve are ingredient rewards you receive from certain adventures in the realm of Eberron that can be used for crafting or to receive special items used in reincarnation.

Before Update 17, these tokens and their fragment counterparts were known as "Epic Dungeon Tokens" or "Token Fragments." The name change appears to have come from distinguishing their origins, as these tokens and fragments only drop from high-level Epic adventures found on the realm of Eberron (original campaign), and not the Forgotten Realms of Faerun, the setting of the Menace of the Underdark expansion, where their Epic level content does not give out these ingredients.

The mechanics of the renamed Tokens work identically to their previous incarnation. Players who possessed tokens or fragments prior to Update 17 will now see these as renamed in their inventory or storage.

Fragments of a Token of the Twelve[edit]

Greater Token of the Twelve[edit]

Greater Tokens of the Twelve replace the "Epic Raid Token" in name. They can appear as Epic end-chest rewards from the Epic raids from Eberron: The Chronoscope, Plane of Night, Zawabi's Revenge on Epic Normal, Epic Hard or Epic Elite difficulties.

There are no Greater Token fragments, instead, the game sets the easier Epic modes to only have a chance at rewarding the token:

Trivia: Old updates showed a Token floating above an Epic Chest that could be clicked to retrieve it. This floating disk has since been removed with Update 15.

Tokens are granted only through Epic quests found in the following quest packs:

Note: This section is somewhat outdated, but only regarding the exact drop rates. Update 14 expanded Epic difficulty into four new difficulties, each of which have different drop-rates for Tokens of the Twelve, Greater Tokens and fragments.

Epic dungeons and raids of Eberron award special Epic Tokens/Fragments at the end of quest inside of their Epic Chest. There are several types of them and the type depends on the quest you've completed.

Number of drops vary from quest to quest. Longer ones are supposed to give a larger number of rewards.

(Note: Table needs an update. Need more data on ALL quests - % for fragments, chance for more than 1, etc. Currently it's only updated to list Epic Elite values, and those are very rough. Most of the quests listed will usually drop a Token on Hard, and almost always on Elite.)

* These three make up the Web of Chaos story arc, and are the only Free to Play quests that drop tokens; one Greater Token can be exchanged for one normal Token.