Gnomes are small, clever, and insatiably curious, yet not as strong as others. They gain bonuses vs. giants, bonuses with and against illusions, are hard to hit due to their small size, and have a general affinity with magical devices.

Gnomes love magic, inventions, and secrets. Often skilled with illusions and mercantile ventures, many gnomes dabble in magic of one kind or another, though some are skilled with light hammers and similar weapons.

Originally a premium race, Gnome was made free in Update 53.

There is one dragonmark carried by Gnomes - Mark of Scribing, carried by House Sivis. House Sivis has developed a method to guarantee that a message carrying their mark is authentic. 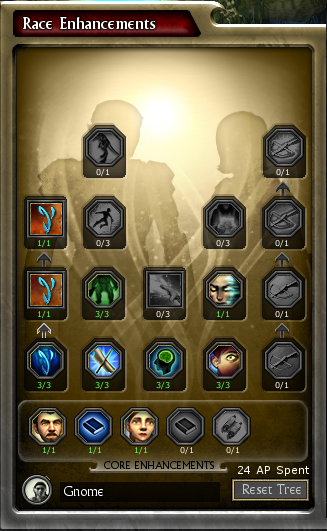 Most gnomes take a scientific approach to everything they do; every action of the gnomish people as a whole has been premeditated in just such a fashion. This is not to say the emotion is discouraged; it is just considered to be subservient to logic, more of a factor to be rationally incorporated into one’s decision. It’s a very consequentialist view of the world, but it tends to work for them.

Despite their super-rational outlook, gnomes always seek to improve their knowledge base by assimilating new information. They are innately curious, sometimes to a fault, and are highly interested in just about everything under the sun (so long as they haven’t seen it before).

Gnome alignment is highly variable, but rarely a popular topic of conversation since it is governed by the pseudo-sciences of philosophy and psychology. Even so, most gnomes are lawful in alignment, since their small stature and history have taught them that it pays to follow the rules and stick to your word if you don’t want to end up with your head on a pike.

In size, Gnomes are between Halflings and dwarves. Typically standing 3 to 3-1/2 feet tall, and weighing 40-45 pounds. Both males and females tend to be around the same height and weight. Skin color ranges from dark tans to woody browns, with eye colors typically being shades of blue. Hair is usually a light color. Males usually keep short, carefully trimmed beards. Gnomes are considered adults at age 40 and often live into their fourth century.

Although they do their best to be hygienic, being in the constant presence of alchemical solutions and other similarly bad-smelling things gives them a perpetual odor, often smelling of explosives that they use to blast away rock formations to create the caverns in which they live.

As inferred from above, gnomes are skinny by default. No one in a gnome city lives lavishly, and because they rely more on technology than hard labor to carve out their mines and settlements they have never become used to hard physical toil. Such a thing would be impractical in their view, since laborers would only require more food to sustain their workload.

During the Last War Gnomes claimed lands in southeastern Breland as their own, claiming independence and creating the country Zilargo.

Cities in Zilargo are marvels of architecture, combining the Gnomish knowledge of architecture and engineering with that of magical creations and elemental bindings. They also boast some of the largest and most complete libraries in the world.

The Library of Korranberg is known worldwide for its collection of knowledge. The library prides itself on not limiting its focus to one area of knowledge, but being dedicated to collecting all knowledge. In addition to being a place, it is also an organization with students, teachers, and explorers all over the world seeking to bring more knowledge back to the library.

Gnomes are frequently encountered outside of their cloistered homes; gnomish governors encourage outside exploration since it cuts down on the number of people they have to feed and often results in the addition of new trade routes discovered by travelers. Plus, it is exceedingly rare for any outsider to enter a gnomish city, even if their personal relationship with the gnomish people is a good one. This isn’t necessarily due to any trust issues on either side; it’s just that the gnomes do not build their homes to accommodate outsiders and it is exceedingly hard for a human-sized creature to move through a cavern with a ceiling less than 4 feet high. This is evident of the prevailing trend in all gnome activity: gnomes build to protect their own, not to increase the convenience of others.

Despite being related to fey, gnomes are rarely tree-hugging hippy freaks; only the select few that become druids live up to that stereotype. Most gnomes take a very pragmatic and scientific view of life and of worship; if it enhances their lives for the better, it’s worth doing. For this reason, many have taken up the worship of deities. They tend to favor gods with dogmas that espouse the virtues of scientific research, while at the same time condoning faith and reverence.

Gnomes naturally speak Gnomish, a language that is actually quite phonetically similar to Common but is spoken with such rapidity that it sounds entirely different. When gnomes speak Common, they tend to speak with a similar pace, making it difficult for others to understand (of course, they are so used to it that they understand each other just fine).

Gnomes have the uncanny ability to recite a great deal of their entire family heritage, which is dictated by gnome culture to be the proper annunciation of one’s name (for example, a gnome may introduce himself as Namfoodle, son of Snoonose and Sorassa, and then continue backtracking to the limit of his extensive memory). This is complicated, however, by the fact that gnomes have family histories that, if written down on paper in fine print, would stretch for multiple pages. In the interest of honoring tradition but also of saving time, gnomes sometimes speak so quickly when reciting their full names that they are practically unintelligible. Since outsiders never have the patience to listen to such long-winded recitations, gnomes often truncate introductions to first name only when dealing with those of a different race.

Officially the lands of Zilargo are ruled by a triumvirate. The triumvirate was created when the three original city states needed to band together during the Last War. Unable to fully trust each other, one leader from each city was named to the triumvirate. To outsiders the lands of the Gnomes look peaceful and idealistic - low crime rates, beautiful cities, and friendly citizens, and a thirst for all knowledge.

Internally, complex politics, blackmail, deception, assassination, and espionage are all common tools. Two gnomes could be close personal friends and still seek to backstab each other over some political feud, and part of these complex maneuverings seems to come from a gnomish enjoyment of the art itself as much as from a desire for political power. Few people outside of Zilargo see this side though.

Also unknown to virtually all outsiders is The Trust. This hidden order of spies and assassins was created by the triumvirate to maintain law and order in Zilargo. Every citizen of Zilargo knows that anyone they speak to could be an agent of the trust. But, they see this as a virtue not an evil, they have the lowest crime in all of Khorvaire. The trust only acts to maintain the security of Zilargo as a whole. If one gnome backstabs, steals, or undercuts another, that is just business. But, if a gnome murders, or steals from the library or gives gnomish secrets to outsiders then the trust steps in to correct matters.

Despite its appearance of weakness, or perhaps because of it, Zilargo has been able to maintain its independence. The gnomes actively work to maintain their appearance of pranksters, tricksters, dedicated seekers of knowledge, shipbuilders, and skillful diplomats.

Gnomes are everywhere. They are the tellers of the dwarven banks. They are the merchants and sailors in the coastal cities. They are the crafters and laborers in Breland. They hold positions of trust in the Arcane Congress and University of Morgrave. House Sivis sends communications all over the continent. Gnomes tend to be happy and cheerful, willing to lend a hand for a modest fee, or to lend an ear to anyone with a story to tell. They are also skillful merchants and negotiators. They are typically well-spoken, and fluent in several languages.

Family loyalty is very important to Gnomish. In a society where deception, blackmail, and espionage is common, family is the only people you can trust completely. Favors and honoring debts is also very important. Politics in Zilargo are bound together by a web of secrets, debts, and favors owed.

Magic and subtlety play a part in everything in gnome’s lives.

Gnomes love story telling and songs, and often use illusions to enhance the performance.

Upper-class Gnomish clothing is some of the most striking ever seen, weaving incredible illusion spells into the fabric itself to create unique hypnotic patterns as the wearer moves. Or to present beautiful scenes in the cloth, such as a sunset over mountains. Even non magical clothes tend to be lose and flowing. Hats are incredibly popular with a typical gnome owning a closet full of headwear. Jewelry is often used to accentuate the clothing, but will just as often be crafted of copper and glass as it will be of gold and gems.

Gnomes will use prestidigitation and minor cantrips to help maintain their personal appearance and to keep their property clean and bright. High-end Zilargo establishments may turn away patrons if they don't meet a minimum level of appearance. Gnomes also have a highly developed sense of smell, leading to use of perfumes by both males and females, although they are often so subtle that others races can not even smell them.

This sense of subtlety carries through to even their foods. Zilargo chiefs often use subtle spices and flavors that have been obtained from all over the world, and even some that can only be obtained through the use of minor prestidigitation spells. An example of this would be a favorite drink called Maleko - chilled water infused with very faint traces of various flavors. Often so subtle that other races cannot detect it, many are confused by gnomes ordering of water instead of ale.