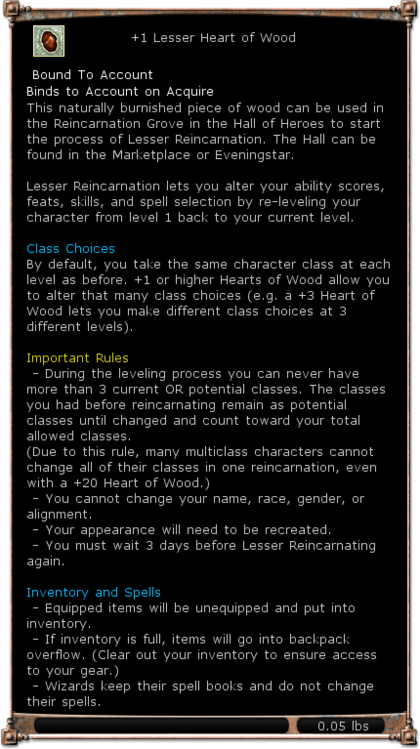 IMPORTANT WARNING: There are some critical limitations on Lesser Incarnation, especially if you currently have a multiclass build and are using a +# Heart of Wood (+3 HoW, +20 HoW, etc.) to completely replace one or more of those classes with a new class! Read everything, be 100% clear on how it works and what you can/cannot achieve with a single Heart of Wood, and ask questions in the Forums if you are not 100% sure that you are 100% clear!

Characters must re-select their appearance, so if a player wants the character to look the same, they must take careful notes (or screenshots from different angles) to refer to

If a character has enough experience banked to advance in level(s), all must be trained in game before the character can reincarnate. (Spending all Action Points is not necessary.)

Changes during Lesser Reincarnation are made in two distinct phases, parallel to creating a brand new character:

(* NOTE: Although this is allowed, it is not recommended, at least not literally "immediately after"! There have been problems reported with True Incarnation when TR'ing "immediately" after another incarnation. It is strongly recommended that, after performing a LR (or ER), you first log out of the game, wait at least an hour or so, and only then perform your TR, to allow the game time to properly and fully process the first changes.)

Once the Life-Shaper has accepted your request for Reincarnation, that character will have a button on the login screen saying "Reincarnate". You need to log out to use it. If you click on that button, you are required to enter the character's name once again, then the standard process for creating a new character is started, except that depending on the item you have used to reincarnate, you cannot change certain features. Those will either be skipped, or you receive an error message.

Note that when you first log in and are placed into the character creation process, if you wish to swap out the mandatory class assigned at level 1 for an Iconic race, at the "Choose Your Play Style" screen you will want to select the style (Melee, Spell, or Special) which contains the class you desire to change to and not select your Iconic race, which will lead to you being assigned the same default level 1 class. Once you have re-created your character, it will appear as a standard freshly created character in rags on the login screen, but if you log in, you will appear in a special area, floating in space, with only a single NPC for you to talk to. There is no way to leave this place other than by completing the reincarnation process, and as there is no bank and no mail-box, you cannot transfer equipment until you are done reincarnating. All your previous equipment will be undressed and placed into your inventory if there is enough space, otherwise it will be placed into a special reincarnation bag-pack. It is recommended to ensure that you have enough free space beforehand.

The next steps are very similar to the process of creating a new level 4 or level 7 character, except that once you talk to the NPC your previous XP will be restored, so that you are exactly at the same value as before. During the process you can either tell the NPC that you follow your previous path (your previous class), or, if you used a +X Heart of the Wood, that you follow a different path (different class). You can select your class on each level, but you cannot exceed the limit of 3 classes. In addition you make selections for skills, feats and attributes per level as if you were leveling at the appropriate class trainer. Once you are done leveling up, you are given the option to distribute your action points on Enhancements, however this can be done later as well.

Only if you have completed the entire process, you can speak to the NPC again to leave the place. A portal will open that transports you to the Halls of Heroes.