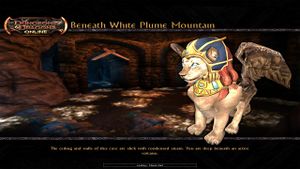 Powerful mobs that will happily kill you.

Slashing traps in the underwater tunnel to Bluto.

Talk to the Sphinx.

Three paths open before you, one for each crest.

Sphinx Riddle (only asks one of three questions, randomized)

The paths to the three crests
The crests are virtual - once you have one, it is automagically placed in the correct socket back near the start.

Note that the paths to the three crests do not match left/center/right to their respective sockets, but you have to get all three anyway, so...

The right-hand path has no named loot, so that may be the best to do first, if you care about latecomers.

Back to where the path originally turned north. Kill 2 - 4 efreet (Nix, Nox, Cox, and Box). After the first Efreet is killed, the other 2 spawn so it is best to kill the first two simultaneously.

The above was automatically compiled via DPL, 04:00:47 result from cache, age: 06:39:09 of max 1 day - if you think that's not up-to-date, refresh it by visiting this link (please, use sparingly, since it puts some additional load on the server)