White Plume Mountain and Other Tales

Wikipedia has an article on the same subject:
White Plume Mountain 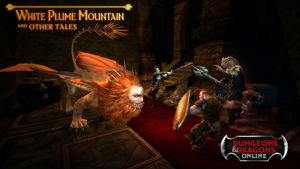 The Pen-and-paper adventure is a classic dungeon crawl, consisting of 3 separate paths filled with traps, obstacles, puzzles, and fairly powerful monsters, each leading to one of three different sentient weapons hidden at the end of each path.

The DDO offering is an adventure pack with 5 quests:

* This is one of the few quest packs that has favor with different Patrons.

See Update 39 named items. Includes adaptations of the following sentient weapons which were iconic in the original pen-&-paper module: