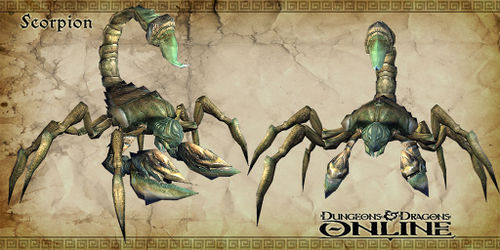 Scorpions are either Vermin type or Evil Outsider type monsters.

In Xen'drik, the drow have an affinity with scorpions. This is likely due to their worship of Vulkoor, a god whose avatar is a Drow Scorpion. They use scorpions as guards, wards, and traps against intrusion.

Nearly all scorpions are Vermin type monsters. Scorpions which fall under this type are common pests and do not have any special magical qualities. There is one known scorpion in DDO which is Evil Outsider type, which is Wrathspawn.

There is another race of scorpions which are Magical Beast type monsters due to their fiendish blood. See the Fiendish Scorpion race page for details.