The fires of the Twilight Forge glow hot and fierce as plans are made for war across Eberron. Lord Istharan and his forces must be stopped!

This is the pre-raid you must complete to get to the actual The Titan Awakes raid. (This is similar to the Vault of Night raid scenario, where one raid follows another.)

The raid entrance for this quest can be found by traveling through the underground passages in the Restless Isles. You need to get to Volcano's Mouth where an ancient warforged will let you into the quest.

Getting to Volcano's Mouth can be complicated without the aid of the spell Greater Teleport. If you have access to this, you can get straight to the quest entrance by teleporting from an instance to the Twilight Forge entry on the list (the suggested starting instance is Tempest Spine or The Subterrane, because they are raid areas without prerequisites), or the raid group could break up into smaller parties to teleport from 6-man instances (such as the explorer area just below the Foothold, where you had to reset/repair Sigil anyway). If not, then you will need to fight your way there. If you take the Ogre Khan's Skull and the Horrid Golden Figurine with you (found in Ghola-Fan and Shrieking Mines), you can avoid some large fights on the way.

Should you succeed in getting to the end, you will gain access to The Titan Awakes raid.

Note
You can get and enter The Twilight Forge quest at level 8, but must be level 9 to continue into The Titan Awakes raid once you get to the end. 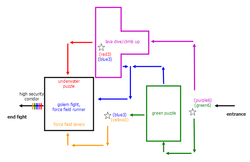 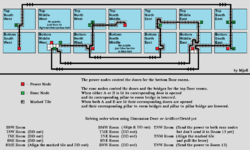 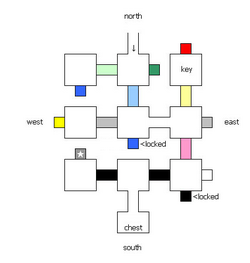 Underwater puzzle solution (with a lockpicker)

Underwater puzzle solution (without a lockpicker) 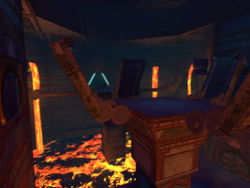 The Twilight Forge is divided into five main sections containing puzzles and other challenges. There are many, varied objectives, some required for completion. The puzzles in particular can be tricky, especially for first timers. The most important things to do if you are new to this quest is listen, watch, learn, and don't be afraid to ask questions.

"Crystals" as referred to below, actually show up in your inventory labeled as "<color> Medallion".

Please note that attempting to go into a colored hallway without having the matching colored crystal will cause hit point damage akin to a damage over time effect, and can result in death. The same applies if you carry a Soul Stone down a colored hallway. Don't do this unless you know you have to. You can have healers that do have the correct color crystal run with them to heal along the way, and/or give them a resurrection and have them run as far as possible as a ghost before accepting the resurrection.

Also note that the colored crystals are limited in quantity and should not be destroyed (manually, or by recalling from the quest after you have received one). If someone disconnects inside the quest, their crystal is destroyed and a new one is available from the Leering Sentinel, but this doesn't happen if the crystal is destroyed manually from the inventory or by recalling out of the quest. There are only 6 green, 6 purple, 6 blue, 3 red, and 3 yellow crystals available. You may need to drop crystals at times if your party is small in order to change the colour of your crystal after completing some hallways, as you can only hold one crystal from each crystal machine.

High-Security Corridor: Once all the puzzles are complete, your party will reunite at a hallway with 5 colored barriers. These colors correspond to the crystals that were picked up at the Leering Sentinels throughout the quest, so the party members possessing the colors needed will have to walk up to the appropriate colored barriers to cause them to drop.

When you finish the quest, DO NOT FINISH OUT. Proceed North over another Force bridge to a shrine and a chest. There will be an elevator shaft that you use to access the second part, The Titan Awakes.

The weapons are ML 10, all others are ML 11. All items are bound to character on equip.