Slavers of the Shrieking Mines

The Shrieking Mines are named for the winds that howl through its narrow tunnels, sounding like the cries of some tormented soul.

Opu the Elder reports that many of his warriors are now enslaved by a horrific race of creatures he calls 'the Shapeless Ones.' You must enter the Shrieking Mines and rescue the wildman captives, now forced to work for the Shapeless Ones and their ogre mage slavers. 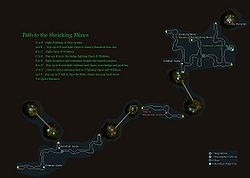