The Restless Isles are your starting point to get to the Twilight Forge. 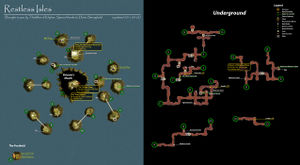 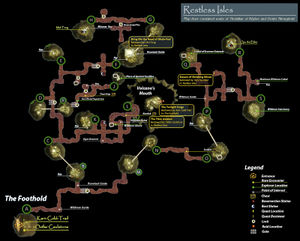 This adventure zone is accessed through The Foothold.

This is a level 10 Wilderness Adventure Area, allowing characters from levels 7 through 14 for full XP gain.

If you do not flag for the trip with Hiding in Plain Sight, you can still use an alternative method:

Note: If you fall off from any of the islands, you will die, even if you have Feather Falling

Feather Falling: This item is engraved with feathers and bestows a powerful magical effect. Whenever the wearer begins to fall from any height, this effect slows the descent dramatically, causing the wearer to fall like a feather.. (Hirelings are unaffected by the death effect.)

Mounts do not work here!

In addition to the Rare Encounter / Slayer / Explorer quests typical to all Wilderness Adventure Areas, the following quests can be found in this zone:

Each Rare Encounter is worth 650 XP; the bonus for defeating all of them is 975 XP. 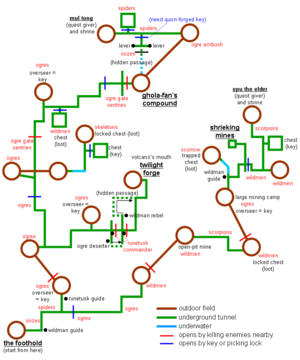 These paths assume you do not have a party member who can pick locks on doors. Unlock DCs are 45 ; if you have a trapper, you don't need the passkeys, and can skip a couple steps below where you detour to get one. Otherwise you need to kill some ogres to get Runetusk Pass-Keys. Also there are several gates which can be opened by killing (all!) monsters nearby.

Before you can enter this area you have to pay off Karn Cold-Trail at the Foothold:

Otherwise, his crew on the island will refuse to help, including Ostler Caulstone who will not repair the sigil for you. As soon as Karn is convinced, Ostler will work as a merchant and Laina the Excoriated will serve as tavern keeper and soul binder.

If you have the quests in your journal, you can use the Wildman Guide and the Runetusk Guide to send you directly to their respective clan footholds. However, they will refuse to help if you have not yet met their elders, or if you have already completed the quests. If you want to keep the guides active, retake the quests after you complete them.

When following the paths described, below, it's fairly easy to simply run/jump past the various opponents in the tunnels. However, this can quickly raise the Dungeon Alert level both in the tunnels and on the islands – consider before choosing that tactic.

Refer to the maps, above right.