House Phiarlan bears the Dragonmark of Shadow, giving them unrivaled control over the power of illusion. 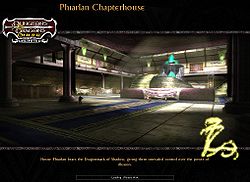 The Maleficent Cabal is secretly planning to strike a social party hosted by House Phiarlan. Cyan has asked you to infiltrate the party and add her to the guest list, so that she can counter them from the inside.

She recommends taking the Phiarlan Chapterhouse's Illusionarium entrance. The Chapterhouse is located in the House Phiarlan Enclave.

The Ball Room is full of NPCs, some you might know, some you might not. Here is a list of who is on the party and is not involved in any optional or mandatory objective, in alphabetical order: