In the previous tour of "The Fall of Truth", a Dwarf played the role of the Stormreaver -- which outraged many critics.
Now that House Phiarlan has taken over production, changes are afoot. 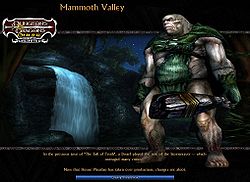 In order to satisfy her Phiarlan financiers, Glitter Underhill need to replace her Dwarven lead actor with someone.... a bit bigger.

Glitter has asked you to find a Giant and sign him into her cast. She's heard of an unusually capable Giant named Brawnpits, who resides somewhere in Mammoth Valley. You can take one of the caravans from the House Phiarlan Enclave to reach it. Glitter Underhill can be found in the east section of House Phiarlan, directly north of the Market travel point.