Like other taverns in Stormreach, the Golden Wing Inn hosts many shady dealings in its back rooms. 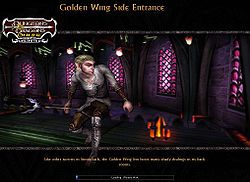 A Halfling named Roderic Nettle has been supplying the Maleficent Cabal with equipment. But now, Ochre wants you to pump Nettle for information on the Cabal, beating it from him if necessary.