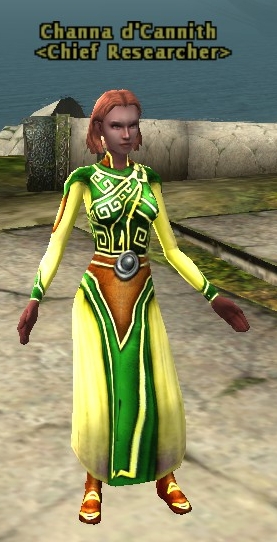 Notes: Apprentice of Merrix d'Cannith, and formerly the Chief Researcher of the quori history in the Isle of Forgotten Dreams, with enough knowledge and skill to fix the Interdiction Lens. Later, she was promoted to Cannith Manufactury Administrator when Toven d'Cannith went mad and tried a desperate maneuver to get rid of the Lord of Blades.

Channa can be seen at the top floor, alongside Caulk and ????. Talking to her will make she randomly say one of those lines:

As soon as you arrive on the island, she will be talking with Chieftain Bitterblood, and will not talk with you. You can hear some of her arguments.

After you complete the Reclaiming Memories quest, and recover the frame of the Interdiction Lens, she will say:

After you get an Aspect Crystal, she will reply:

After you finish The Dreaming Dark, she will congratulate you:

Once everything is done in the island, she will finally talk to you about her plans... kinda:

Before you have finished the quests inside the House Cannith Manufactury, if you talk to her, she will reply:

After you finish the three quests, she will approach you differently:

Talking to her after acquiring the raid, but before completion, will make her say:

On completion of raid, she will congratulate you with the following:

After completing the raid and take the reward, if you talk to her again, she will reply: