Until now, the lush jungles of Xen'drik have hidden the aggression of the giants. Repel the invading force before it can press ahead to Stormreach!

Alciana d'Deneith recruited you to join the defenders of Stormcleave Outpost, a House Deneith fortress under heavy siege by the Xen'drik giants and their minions. Speak with Alciana to arrange transport to Stormcleave. Then sally forth from the outpost and find a way to break the back of the invading army! 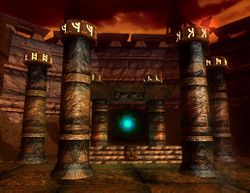