Razorclaw Shifter is an Eberron Iconic (starting in Sharn) that represents a third Subrace of Shifter, one focused on attacking things with claws. They get a unique set of attack animations when using Handwraps. This animation set is timed similar to Monk Handwrap animations.

Starts with 1 level of: Barbarian

Also available as part of the Fables of the Feywild Ultimate Fan Bundle.

Shifting is very similar to Barbarian Rage. Its duration uses the same calculation as for a barbarian's Rage ability, and all bonuses gained that apply to rage will apply to shifting, even when this may not be intuitive - for example, a Razorclaw Shifter with at least 11 levels of Barbarian will gain an additional +2 Strength, +2 Constitution, +1 Will, and +10 Melee Power while shifting, thanks to the increases provided by Greater Rage. Bonuses from racial enhancements and barbarian enhancement trees also appear to fully stack, including those to duration (Extend Shifting and Extend Rage) and to ability scores (Hardy Shifting and Hardy Rage).

This feat can be stacked up to three times. 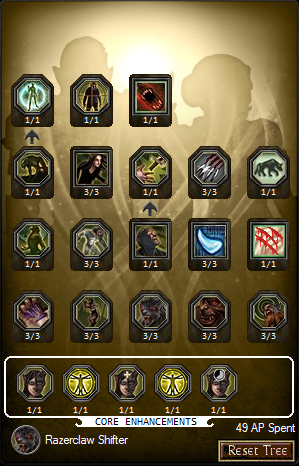