The Fall of Truth

What has the Stormreaver been doing, hidden within his chambers in the Tor? 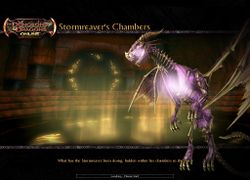 With the Tor re-taken, you have access to the Inner Sanctum of the Tor. Here, the Stormreaver plans to meet his ancient enemy, the Truthful One, in combat. Join him there and aid the Stormreaver in battle.

(Do not get confused with the spectacle of the same name running in the Livewood Theater.)

Re-flagging for this chain is not required.

The Fall of Truth loot

The above was automatically compiled via DPL, 04:28:02 result from cache, age: 21:07:35 of max 1 day - if you think that's not up-to-date, refresh it by visiting this link (please, use sparingly, since it puts some additional load on the server)