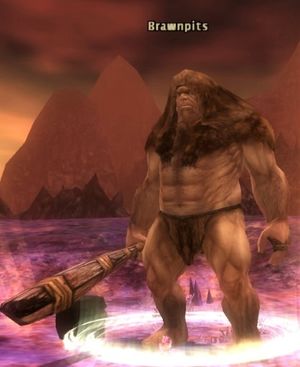 Receives Quest(s): The Fall of Truth

While searching for Brawnpits, he actually ends up finding you near the waterfall:

From there, he will guide you to his camp, complaining in the way.

Once you are on his camp, you can question him about your true motives to search him:

Once Brawpits understand what is theater, you can invite him now:

Once you agree with Brawnpits teaching you about the spirits of the valley, he will send you to your first mission:

When you accept the mission, he will say:

If you bring him Cursed water, he will be angry:

When you bring him clear water, he will congratulate you:

When you accept the mission, he will say:

When you bring him the six rocks, he will congratulate you:

Collect some firewood for Brawnpits[edit]

When you bring him the firewood, he will congratulate you:

Seek blessing of the sky spirit[edit]

After you ward off the elementals, he will say:

After taking the mission, you get one extra option to ask him:

After you talk to the Spirit of the Sky, and defeat the tiefling attackers, you can make your offer again:

While he is following you, you can talk to him at any time:

When you reach the Grim brother's camp, if they are still alive, he will say the following to them:

After that scene, you need to talk to him again:

When you reach the Grim brother's camp, if you fought and killed them, he will ask you:

Brawnpits can be found randomly in the epic version of the Ruins of Gianthold while looking for giant relics. He bestows the random encounter A Smaller Problem.

Brawpits can be found dancing around the Stormreaver at the start.

After you destroy the Truthful One, you can complete the raid talking to him:

After completing the raid and getting the reward, if you talk to him again, he will say: