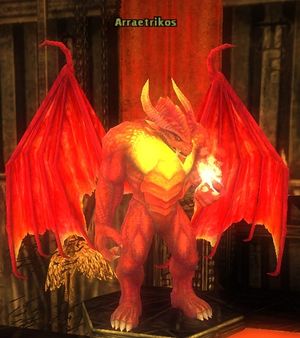 As a level 28 caster using Maximize and Empower, though his spells all cap at CL20 or lower:

Description: Known as the "General of Shavarath", Arraetrikos is the raid boss of The Shroud raid, introduced in Module 6. Arraetrikos is encountered in Phases 4 and 5 of the raid.

He is often nicknamed "Harry" when discussing "Harry Beaters," weapons containing both Silver and Good that will bypass his damage reduction.


For a while, Arraetrikos counted as a Horned Devil called Captain of Shavarath in the Monster Manual. This no longer occurs.

Arraetrikos appears in a number of other quests, including the quests in adventure pack The Devil's Gambit (where he makes brief appearances in each quest stealing a powerful magical artifact), The Devil's Details (where he makes a short speech to his minions before departing for the Shroud), and Tower of Despair, where he is, for once, on the party's side. He also guest starred as the reward NPC for the fiendishly-themed second season of the Hardcore League.