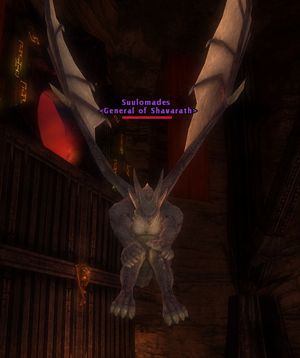 Description: Suulomades <Arraetrikos Right-hand> is the Raid boss controlling The Subterrane - Central raid zone. He is eventually encountered in A Vision of Destruction (introduced in Module 7). Also later makes an appearance in The Tower of Despair (introduced in Module 9). The Tower Version has minor differences. If you know the specific differences, create a new page with them listed. He is a devil, sub-type Horned Devil. Also plays a non-active (and non-target) role in The Chronoscope.

Suulomades has two entries in the Horned Devil Monster Manual - once for A Vision of Destruction and its legendary variant, and once for his appearance in Tower of Despair.

Editor Note: This refers to Arraetrikos, but currently all raid Pit Fiends and Horned Devils share the same DR stats.