Amrath floats high above, secured to the ground by colossal chains. The Codex page the Archon spoke of must be nearby. Recover the page before the Demons can reinforce the area and take the page back to their lair. 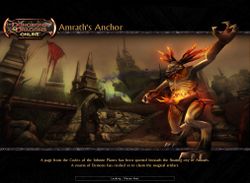 The Archons wish to obtain a page of the Codex of Infinite Planes that has been spotted nearby - but a swarm of Demons has beaten them to it.

Travel to Amrath's Anchor, defeat the Demons, and retrieve the Codex page.

The above was automatically compiled via DPL, 04:32:14 result from cache, age: 20:49:19 of max 1 day - if you think that's not up-to-date, refresh it by visiting this link (please, use sparingly, since it puts some additional load on the server)