Arraetrikos has made the Adamant Spire into his new base of operations. The leader of the Devil army suffered a setback when a ritual involving the Codex of Infinite Planes failed. Now you must learn the details of his latest plan. 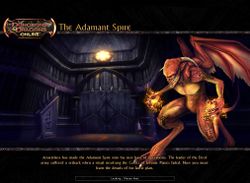 Arraetrikos, leader of the Devil armies, attempted to conduct some kind of ritual using the Codex of Infinite Planes - and failed.

The Archons want to you to find out what the Devil leader is planning next. Travel to the Adamant Spire and learn the details of Arraetrikos's scheme. According to the Archons, you can enter the Adamant Spire through a neglected well.

The above was automatically compiled via DPL, 06:10:17 result from cache, age: 19:34:48 of max 1 day - if you think that's not up-to-date, refresh it by visiting this link (please, use sparingly, since it puts some additional load on the server)