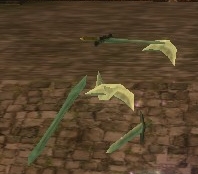 
Special Qualities: Invulnerable; cannot be targeted, damaged or destroyed; cannot save against its damage through any means

Description: The Whirling Blades (also known as Shroud Blades, Shavarath Blades or Blade Storm) are just that--a tightly packed group of spinning, flying blades that cause untyped damage to any character that encounters them.

Unlike most enemies, the Whirling Blades cannot be targeted, damaged or destroyed. The Whirling Blades will sometimes travel in a random path or follow a character until the blades can damage them. Characters can jump above and out of the way of Whirling Blades, but cannot resist any damage from them, no matter how strong the character's Armor Class, Saving Throws or Evasion feats.

In Update 11, the Whirling Blades emitted much greater damage and appear more frequently in both the Shroud and the Devil Battlefield. Update 13 reduced the number of hits per second and overall damage of the Blades at all difficulties, yet kept them still very damaging in swarms. Update 27 introduced two adventures where the Blades take on their deadliest form.

You cannot attack the Blades. Your only defenses are to outrun them, outwit them (by teleporting or jumping away) or submit to their damage. Often, the Blades take 2 to 3 attacks against you as they pass. For low-HP characters, this can be fatal. Traversing through the Battleground or the Shroud requires you to have an immediate healer on hand.

In the Battlefield, the Blades wander aimlessly but will follow an adventurer who gets too close to them. In The Shroud, the Blades travel through the central circular hallway adjoining the puzzles in Phase 3 (The Challenge of the Waxing Moons) but do not target adventurers and can be avoided by escaping into an open puzzle room.

In Phase 4 of the Shroud (The Challenge of the Full Moon), a set of Blades will appear when any Bearded Devil is slain. These Blades' aggro is totally random and will often go after the player in closest proximity. The Blades in Phase 4 will eventually disappear after approximately 20-30 seconds.

A practical party tactic (with Update 11) is to use any spells that hold or freeze all Devils while each Devil is killed off one at a time, allowing for only one or very few Blades appearing at once. This allows healers to have a much easier time targeting players before they are slain (where they cannot be resurrected until after the Phase is completed) and avoids the high probability of significant party HP damage from the start of the Phase.

The Blades finally appear as well as a spinning circle of death around Arraetrikos as he lands to fight the party. Before Update 11, a party could stay close to "Harry" and attack him, ignoring the Blades, but no longer. The circle of Blades will certainly annihilate anyone within their range. This requires parties to consider a "stick-and-move" fighting style, stepping or jumping away from the Blade's circle while it is still relatively wide. Adventurers who are outside the circle (often healers and ranged attackers) can be used to warn the melee group on Arraetrikos to escape the circle before it closes in.

The Blades appear in a new Update 27 quest, Demon Assault, as well as the Epic raid, Defiler of the Just. In that raid, the Blades are at their deadliest, striking at over 800 points of damage on Epic Normal, around 1,000 points on Epic Hard. Many characters will not survive even a brief encounter with these strongest Blades, so escape is extremely important.