In the city of molten iron and scorching heat, the Firebrand gnolls delight in the misery of their slaves.

Jaefan Druz told you about the slave-taking habits of the Firebrand gnolls. According to Druz, the Firebrands wield the evil magics of demons and efreet in order to seize victims and work them to death – or eat them alive! Druz wants you to free the slaves of the Burning City, hidden deep in the Menechtarun, and bring back the Orb of the Efreet. This artifact is treasured by the rulers of the Burning City, and it will prove that you have broken the power of the Firebrands. 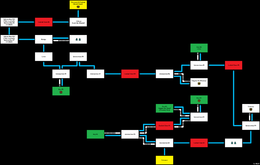 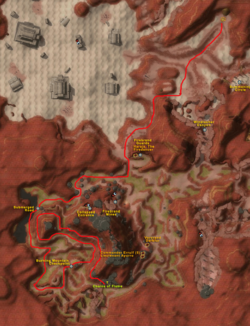 Map to mission entrance
Spoiler Warning: Information below this point can be considered spoiler material!

Getting to the quest
Follow the route on the map (right), following the path in the red landscape. When this visible "road" goes into the water, take a swim (you can still see the "submerged road" continue underwater if you dive). As the land rises out of that water, look left for a skybridge – you'll need to find your way up to cross that. To get there, hold to the right-hand wall – you'll drop down, then soon be forced east – as you climb, look left again and you'll see it. Once across that, fight your way along the narrow cliffside trail to the quest entrance.

Map notes
Due to the complex quest design (too many overlapping floors in this case) the number of symbols placed on the map is kept to a bare minimum to avoid confusion.