An Offering of Blood

The ritual pilgrimage to the Vulkoor Spiral is practiced by many drow and scorrow. Its winding tunnels were supposedly formed where Vulkoor rested from the desert heat.

Calyx Shattermoon, an outcast drow priestess, told you about the Vulkoorim Spiral, hidden in the southeast of the Demon Sands. This shrine is sacred to the Vulkoorim, a scorrow tribe that believes it was chosen by the god Vulkoor to rule over scorrow and drow alike. By stealing the blood of a sacrificed gnoll, you can strike a blow against the Vulkoorim and their wrathful god. The shrine should also be rich with the gifts of Vulkoor's worshippers... 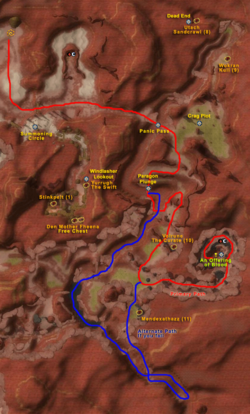 This quest gives the Blessed Blood Offering, one of the three items required for the Demon Queen raid.

Stepping into the quest, you are at the top of a long drop. This is a good place to buff up. Head down once everyone is in. You'll be greeted by a bunch of scorpions.

When you are ready for a fight, grab the bowl from the altar. This triggers a scorpion. Fight him at the north door. As soon as he dies, the door will open and the race will begin.

This quest has constant respawns behind you at different points. They will all run up the spiral trying to catch up to you. The best way to deal with this is to move quickly and leave crowd control as you go. The doors to the left contain optionals and sometimes chests. Many groups will go for the speed route and ignore these doors, so make the plan before you take off.

The first bridge you reach is trapped with fire, so be careful. You can close bridges behind you, but if you do so you cannot get back through later, if you should need a re-entry. It does block the respawns behind you, though.

When you get to the firewall blocking the door further, kill the named to open the route up. There is a chest in the side passage there, if you are feeling up to it. Heading further up the spiral, you will eventually get to another bridge room. There is a pit under the bridges that leads to a safe, submerged tunnel, and another shrine.

After shrining, someone, or everyone, is going to need to climb up the lightning trapped path, or across the ledges around the back of the room, and drop down and lower the second bridge from the other side. To get across the ledges, turn to the right (east) after you have come in the door. Climb the ledges in front of you (to the right of the entrance, i.e. east of the bridge), at South-east corner of the room there's a large rocky structure you can climb up. Keep climbing and turning right, jumping onto small ledges going clockwise, moving back across and above the (south) entrance to the room. The ledges now continue around the left (west) side of the room; once you reach the end of them, jump with feather-fall as far as you can on to the up-ramp rising up from the floor which should take you past the lightning traps, keep going right (east) and drop down behind the raised bridge. Once everyone is across, lift the bridge back up and clear the area.

The next room is the last fight. Take out the support scorrows before dropping the drow caster. He has super duper stoneskin, but it will drop eventually. When he falls, ignore all the scorpions that appear, head further in and into the next cave, talk to the drow and complete the quest.

Now head back to Calyx in the Refuge to get your blood bowl and an end reward. (With many thanks to the Lost Leader for most of this walkthrough.)