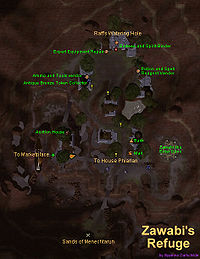 This area is the hub for the Demon Sands adventure pack. It can be accessed by taking the quest Desert Caravan at least once from Iosynne d'Phiarlan in House Phiarlan (level 8 is required for the quest), or simply by talking to wayfinder Kupper-Nickel in the northern part of the Marketplace. It has a unique al fresco tavern, Raff's Watering Hole.

Access to Zawabi's Refuge does not have a minimum character level requirement, although this area is recommended for level 8 and higher.

Talk to the following NPCs to gain access to quests and/or claim quest rewards. There are also additional quests in Sands of Menechtarun wilderness adventure area that trigger when you walk in front of its dungeon entrance.

These NPCs serve no function other than to populate the area.