Festival of the Traveler

Festival of the Traveler or the Traveler’s Scavenger Hunt is an in-game event held generally around the March equinox[1]. As with many DDO festivals, the actual date changes every year. 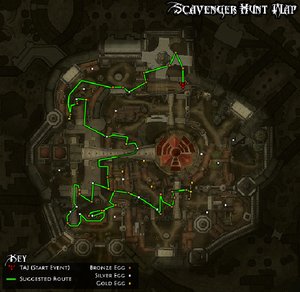 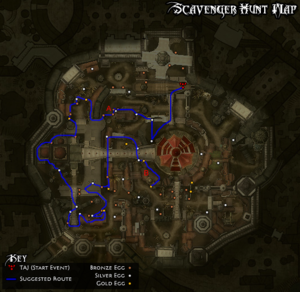 Purchase Tokens of the Traveler and visit an NPC Taj <Festival Egg Collector> in the Marketplace. Players are tasked to do the "Egg Run" within the Marketplace area, where you collect special Eggs that are visible only while the game and "Traveler's Sight" buff is on.

The game has time limit of 3 minutes, so you have to figure out efficient paths, jump up, poke around and find highly valued Gold Eggs and such. Depending on the amount of eggs and points you have gathered, you build up Aura-style buffs, you then turn these Auras in to Taj to claim your reward. The Aura doesn't immediately expire when the game is over, so there is no need to go back to her within the time limit.

Rewards are separated in two category ("standard" and "special") and are also tiered by the magnitude of the Aura but randomly distributed. i.e. Taj determines what you receive, you cannot choose from a list or anything. Standard reward is just a common random loot (weapons/armors/jewelry) that is appropriate for your character level. Special reward requires you to turn in Blessing of the Traveler together, and you receive various Store-items listed below. Unless you're using free tickets, all this is basically like gambling with your DDO Points.

Your prize will depend on the level of the aura you achieve. Eggs are worth aura points:

The aura levels are:

Eberron lore about "the Traveler"[edit]

The Traveler is one of the deities counted among a pantheon known as the Dark Six, though he's not known as a god of evil. A chaotic being that favors change, he is the patron god of travelers, and many adventurers and wanderers pray to him for safe journeys or blessings on their voyages. It is said that the Traveler is a being of many disguises, roaming the lands where and when you least suspect him. Known as the "Giver of Gifts," this god of creations and artifice can be as mischievous as he is mysterious, giving rise to the old adage "Beware the gifts of the Traveler".

Reward for 2012 were the same as 2011, mainly the rods of teleport were taken out and the egg placement was changed slightly.