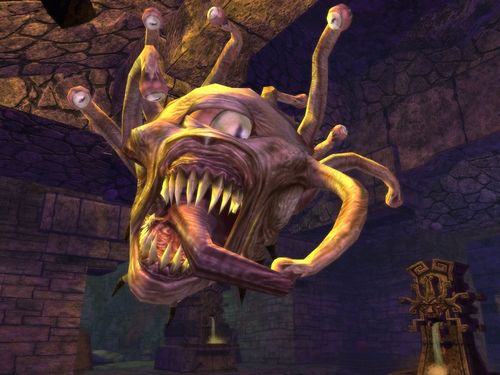 The notorious Beholder is one of D&D's signature monsters and the bane of buffed, non-Warforged players everywhere. It has ten offensive eyes on stalks, and one large antimagic eye on its face. The large fangs are an afterthought compared to the incredible magic damage a Beholder can cause.

While a beholder is physically weak, it's ability to strike an unprepared player dead instantly in several different ways makes it one enemy that you cannot take lightly.

Fortunately, a beholder's defenses are not equivalent to their tremendous damage, and the aberration can be quickly dispatched if you react fast.

Keep your distance once you find one. Formulate an attack plan. The second it sees one person, it often sees the whole party.

Beholders often have True Seeing (it must be the eyes). So Invisibility effects are useless.

However, players with good Hide/Move Silently skills can likely approach a beholder to point-blank range, giving them an advantage in reaction time. Great tactic for players with Stunning ability or those who can assassinate.

Tactics to deal with Spell Absorption and Negative Energy[edit]

While the Death Ward spell can deflect several of a Beholder's rays, the monsters often dispel all such protection at the start of any combat.

A permanent Deathblock item, while only good against the Finger of Death, cannot be dispelled. Alternately, the Silver Flame Talisman (3rd tier necklace upgrade of the Silver Flame Nugget) has Protection from Evil, Deathblock AND Negative Energy Absorption (10/rest) making it a very handy item for battling Beholders.

Alternately, the Mantle of the Worldshaper absorbs 5 spells per rest; the unsuppressed version of the Pale Lavender Ioun Stone, which provides 12 - 50 levels of protection from some attacks (1-4 per shot) and recharges at 15 charges per rest. However, Pale Lavender Ioun Stones do NOT protect from Enervation. As well, the handy but disposable Scarab of Protection provides up to 12 absorptions as well as Deathblock—but once the charges are consumed, this trinket is destroyed, leaving a player unprotected.

Other items to combat level drain and negative energy include the Eye of the Beholder, Beholder Optic Nerves and the Lesser Anti-Beholder Crystal.

A convenient idea to have a font of Restoration spells may be to bring in the Cleric hirelings Fergus or Laerathor (levels 8 and 7, respectively), placing him deep at the quest's start where no monster can see them. Set the hireling's behavior to passive so that they do no automatic actions. Come to the hireling to remove negative levels as required.

The Phantasmal Killer or Finger of Death spells are notably worthwhile for an arcane caster, which will blast a beholder as if it were in a skeet shoot. Similarly, Destruction for divine casters work well. If you're able to get a Wall of Fire spell off before an anti-magic cone strikes you, that's fine, too.

A useful tactic for spell casters to quickly dispatch a beholder is to either use the Enlarge Spell feat to kill them from a safe distance without being affected by their anti-magic cone, or to simply wait for it to turn its backside to you and cast spells at it then.

Since U21, most Spell-like abilities acquired via Prestige Enhancements are unavailable under the effects of an anti-magic cone.

Beholders cease to be a problem for high-level Pale Masters. On unlocking Embraced the Void, a Pale Master gains permanent Death Ward and Deathblock, taking out two of the beholder's most lethal abilities. Beholders are comparatively fragile and can often be killed quite quickly with a decent weapon. Even before this, Pale Masters have a Skeletal Knight pet which is also immune to death effects and will easily handle a beholder at-level.

A Weakening weapon will quickly reduce a beholder's attack as their STR is very low. If the beholder's STR is reduced to zero, they become Helpless and lose all attacks, including their eye rays!

A Banishing weapon does an extra 4d6 damage per hit and may destroy them outright on a Natural 20 (if their current HP are less than 1,000 otherwise it does an extra 100 points of damage). This works since, while their monster type is Aberration, they are extraplanar creatures from Xoriat.

Stunning Blow is a quick way for Fighters, Barbarians and Paladins to slow a beholder's action down as well.

Shintao Monks may be the most efficient beholder slayer, since their speed (especially Abundant Step), Stunning Fist, Jade Strike, Tomb of Jade, and Dismissing Strike banishing attacks can rapidly stun, freeze or banish a beholder outright. As the Monk uses buffs that cannot be dispelled and is an extremely fast class with great saves and little to lose to a beholder's wrath (at least as long as they save once to a Disintegrate spell), a Monk may need only to recharge their HP after he quickly ends a beholder's existence. Ninja Spies also have Pain Touch, which nauseates beholders, disabling their ability to attack in any way. Well trained Monks also have excellent stealth, so they can sneak up on a beholder and stun or kill them before it can react.

Rogue Assassins may also make great beholder assassins with good Hide and Move Silently skills, especially since Assassinate does not pull them out of Sneak when used.

Warforged can bring the smackdown, too. Not quite living, they are immune from negative energy damage.

Paladins can also have strong protections against beholders, with their ability to achieve high saves. Additionally, the Knight of the Chalice enhancement tree provides immunity to energy drain with the Tier 5 ability Sealed Life, and Vigor of Life in Tiers 3-5 reduces negative energy damage.

Essential Tools for Any Player[edit]

Anything with Deathblock and spell absorption abilities.

Armored beholders have greater defenses than your average beholder, and their central eye reduces your defensive capabilities.

Chaos beholders are bright red and their central eye incite you to deal more damage in exchange to hurt yourself.

Doomspheres are undead incorporeal beholders, but other than that, act like your live beholders.

Frost beholders are light blue and their central eye makes you vulnerable to ice damage.

Shadow beholders are rare beholders only found in the Forgotten Realms and mostly in Temple of the Deathwyrm, guarding the Phylacteries.