Open the DDO Store in-game, go to Redeem Code screen, enter "HAPPY15DDO" in the box and click Apply. The code can only be applied once per account across servers, so make sure to redeem the coupon on the game world (server) where you wish to receive the item. The code is valid until the end of the year.

The token may go into your ingredient bag. If not found, log out and log back in. The token can be used to select a named raid item from the following list. Go and talk to the Anniversary Djinn at the entrance to the Anniversary Dungeon in House Phiarlan. He'll offer you barter UI box using your token as an ingredient. Raid items received this way become Bound to Character. 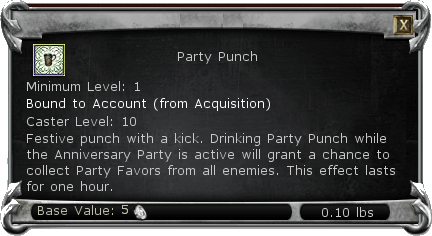