"When Mabar draws nigh, darkness falls and the dead become restless..." 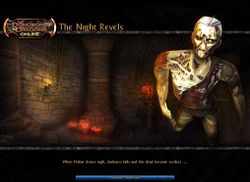 Haverdasher (Kundarak Warder) tells you:
"Dol Dorn! Two groups in a just few minutes? Now I have more help than I need.
I would have gone in with the pale lass who arrived just before you, but those damn scorpions stung me right in my... well, never mind that.
Point is, there was a nest of scorpions down there. Then that lovely lass showed up, and now I hear strange chanting. She's casting a spell to deal with the scorpions, no doubt."