The Mabar Endless Night Festival is a special event introduced in Update 7 during the Halloween season.

The Mabar Festival allows characters to kill respawning undead in the Delera's Graveyard and harvest collectables to buy / upgrade festival-specific unique weapons and items with a flavor of undeath. By turning in collectibles you can first craft then upgrade the items of your choice.

When players trade in 10,000 collectables (has been 20,000 in previous years), the Summoning Chamber opens and players fight an Undead Spectral dragon named Eternity. After killing the dragon, you are rewarded with a Spectral Dragon Scale.

All weaponry and items unique to the Festival are Bound to Character on Acquire, upgraded or not. Collectibles are freely tradeable. 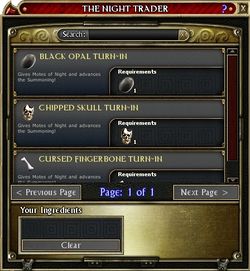 Update 7 modified Delera's Graveyard into a public area. Free to Play accounts may enter the graveyard and participate in the event, but remained restricted from accessing the Delera's Tomb quests inside the area without purchasing the Adventure Pack.

Items that can be collected from killing undead:

Everything other than Motes go into your Collectables Bag under "Festivals / Mabar Items". Motes go into your Ingredients Bag. Ethereal Keys and Spectral Dragon Scales are Bound to Account, all the rest are unbound (including Motes).

The level of the undead that spawn is dependent on either your level, or the level of your party leader. To get higher CR enemies to spawn, the leader of the party should be the highest level. Certain kinds of enemies will only spawn when the CR is high enough (Vampires, Lichs, Whelps, Giant Skeletons etc.). Fighting enemies of a higher CR increase the quality of the drops. Also, fighting enemies that are more than 2 CR levels below you will result in "Enemy was too weak" message and no drops.

There are some good places to farm;

These areas have the most spawn points as well as the largest mob spawns. Joining a raid party will also increase your likelihood of getting a drop because the kills are shared between the whole party, and you can take on larger mobs.

It is not confirmed whether using AoE spell reduce the number of collectible drops, but party members seem to get more drops when the bulk of the fighting is done hand to hand. Drops seem to be more likely when you are physically closer to the enemies when they die.

You can increase the number of motes that you receive by buying a Draught of Midnight from the store (25 TP) or the Mote of Night collector (500 motes). Buying from the store makes more sense, because you will not necessarily get 500 extra motes with the use of the 1 hour potion. 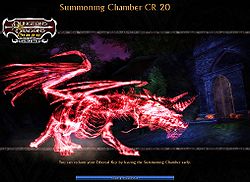 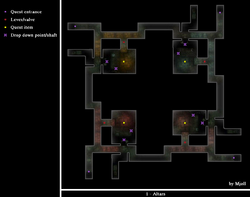 Map of the Summoning Chamber

When players trade in 10,000 collectables (20,000 in previous years), the DM announces it to everyone in Delera's Graveyard and the Summoning Chamber will open. The dungeon entrance is near Joe Lantern. You cannot select difficulty, you are automatically assigned to an instance depending on your level. Level spreads are:

If you are in a party with someone already inside the chamber for your level range, you will join them in that instance of the chamber. If no one in your party is already in the right level chamber for you, you will be loaded into the highest instance number that exists (or if the highest instance has more than X? players already, a new instance will be created for you). If you load into a high instance with too few players, you may want to leave the instance and join party with a player in a lower instance with more players, then re-enter to join their instance. You can see which instance number a player is in by searching for their name in the Who tab of the Social panel (or type /who playername), or in the mouse-over list in the Grouping tab's LFM entry: for example, the first instance for the level 20-25 characters will show as Summoning Chamber D:1.

You need an Ethereal Key to enter the Summoning Chamber. It must be in your inventory, not in a Collectables bag. It is consumed when you enter the Summoning Chamber, and is supposed to be returned if you leave via the door or if the quest fails (it is not returned if you are dead when the quest fails). You will spawn randomly in one of the 4 corners of the map.

When the Summoning Chamber opens, a 41-minute timer starts before more collectable turn-ins will count toward the next opening, and during that 41 minutes the groups inside need to complete:

(Dungeon Master): In 15 minutes, the summoning ritual will dissipate and the Spectral Dragon will escape.

(Dungeon Master): In 10 minutes, the summoning ritual will dissipate and the Spectral Dragon will escape.

(Dungeon Master): In 5 minutes, the summoning ritual will dissipate and the Spectral Dragon will escape.

(Dungeon Master): In 1 minute, the summoning ritual will dissipate and the Spectral Dragon will escape.

(Dungeon Master): The summoning ritual has dissipated and the Spectral Dragon escaped -- you have failed!
Your Ethereal Key is returned to you upon your exit.

Players must get organized and cover eight positions on the map - two in each corner:

Communication with other players in the Summoning Chamber is done by using General Chat.

In the first 10 minutes, get organized and cover all 8 spots by self-sufficient characters or teams. Forming a raid party to talk to each other helps. However, each instance of the dungeon will have its own general chat channel, allowing communication that way.

After the 10 minute introduction, the fun (and/or lag) starts. Once all 4 altars are activated, Eternity appears in one of the altar rooms; generally, this will be the room with the fewest people in it. After a while Eternity will teleport to a different altar room. Additionally, gargoyles spawn in both altar rooms and lever rooms. These are the priorities:

If you die within the Summoning Chamber, you have 2 minutes to be resurrected or you will be automatically released to your bind point. You don't have a soul stone, so you can run to other players if needed (if you aren't completely frozen due to lag). If you release out or if the quest fails while you are dead you do not regain your Ethereal Key. If the quest completes while you are dead (but before you are released automatically), you are automatically resurrected and you receive you rewards as normal.

Once the dragon is killed, you will get a victory message. After a few seconds, everyone is booted from the instance and a Spectral Dragon Scale appears in your backpack. Anecdotal evidence suggests the person who landed the actual killing blow may get two Scales. It has been confirmed, however, that anywhere between one and three scales will be awarded regardless of who strikes the killing blow.

Note that the Scale and/or Signet are bestowed when your character is ejected from the instance, not when the message appears claiming you were given them. Do not close the client before you are ejected or you will not get the rewards. 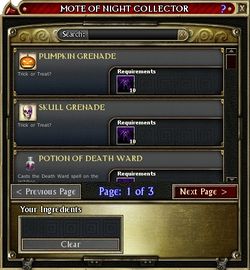 Mote of the Night Collector

To collect these rewards, a player exchanged their Motes of Night with the Mote of Night Collector. All rewards were bound to character.

Upgrading items to a higher level item requires the lower level item plus some additional collectables. Note that you can purchase some of these components from the vendor if you have difficulty obtaining them:

Exclusive, Bound To Character
Each version is ML 1, UMD 15, Arcane (no UMD check for Sorcerers or Wizards)

Eternal Wand of Nimbus of Light[edit]

Exclusive, Bound To Character
Each version is ML 1, UMD 20, Divine (no UMD check for Clerics or Favored Souls)

Bound to Character on Acquire

Cloak of Night: While blocking in a Pale Shroud, you gain invisibility, displacement, and do not take extra damage from Light. Passive: +5 Hide.

The Signet Trader is located in House Jorasco outside the Gates of Delera's Graveyard.

To collect these rewards, a player exchanges their Signet(s) of the Endless Night with the Signet Trader.

Tolero: Post script, we do intend to extend the festival once we call in the Kobold exterminators to make up for lost time. DDO Forums