Ghost of a Chance (epic)

The brothers Worley discovered a pirate smuggling operation. Now one of them is now dead and the other is imprisoned somewhere within. 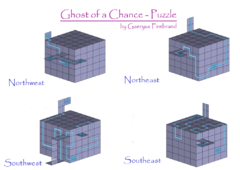