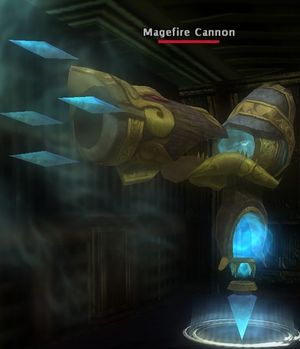 Description: Cannith crafted Magefire Cannons are stationary animated objects designed to pin down and destroy the enemies of House Cannith. Sometimes hidden, they deploy into firing position when they detect approaching enemies (that is, usually you). In addition to their standard fast-shooting force shot, they can charge up to fire off several special blasts:

Some Magefire Cannons, such as the ones in Secrets of the Artificers, have a trap Control Panel near them. If you successfully disable it, the cannon is laid inert. If you award a critical success on the disabling (DC+20), the cannon instead will turn friendly to you and shoot any enemy in range.