In the chasm beneath Thunderholme there is a temple to a dark god. A temple that the Dracolich Aurgloroasa has long called home. 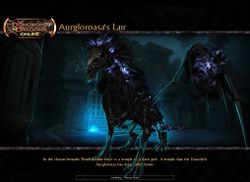 You are determined to destroy Aurgloroasa, the ancient shadow dracolich who destroyed the dwarven city of Thunderholme. Descend deep into the ruins of Thunderholme to Aurgloroasa's lair and confront the Sibilant Shade.

After you defeat Sarva Bellistrae in The Ruins of Thunderholme, return to The Thunder Peaks public area to speak with Thela Bonmar. 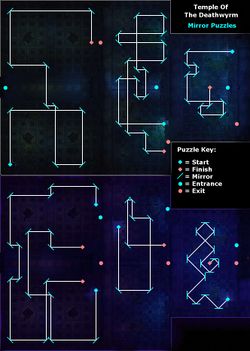 Mirror Puzzle, all in one image 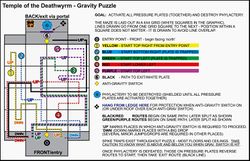 If you die, you cannot be resurrected until the Keeper Wraith that spawns on your death is killed

Buffs are not necessary at this point; in the next two puzzle rooms the group (other than the puzzle solver/s) will usually be in a confined area clearing minimal amounts of trash mobs until the puzzle is complete and then moving on – casters can optionally conserve SP at this stage but should (on normal/hard difficulties) make it through to the shrine room with plenty of SP to spare.

Mirror Puzzles occur in large open rooms, with mirrors scattered among the pillars. The odd numbered puzzle is on the material plane (regular lighting) and the even numbered puzzle is in the Shadowfell (purple lighting and blurriness).

In each Mirror puzzle room there are two crystals: one horizontal sender (start) and one vertical receiver (end)

The puzzle solver(s) (one or two at most: one progressing forwards from the sender; one working backwards from the receiver) are the only players who need to be out in the room

Mirrors can be oriented in any of 8 possible directions, however only 2 orientations actually reflect the beam, to divert it either left or right

In almost every case, when standing behind the current mirror at the end of the beam, checking left or right will reveal that one direction has a mirror and one direction lacks a mirror

With an inexperienced puzzle solver, the puzzle is best done starting from the sender crystal: The solver can see the beam and bounce it along the mirrors until it reaches the receiver

With an experienced solver, the puzzle is best done backwards from the receiver: The solver can position the mirrors without bouncing the beam everywhere and endangering anyone

Twice during the raid you will arrive at a room with a choice of two portals (each having a rune offering hints as to what is through each). You will have a choice of two of these puzzles, chosen from a possible three for each stage. One portal will be randomly inactive.

At this stage, the options are as follows:

See information in Stage 1 (above) – repeat to solve and move on each time.

This room consists of a named Bone Guardian that you need to kill in order to activate the next portal (and get an extra chest). It is a living construct, so Construct Bane and Smiting weapons are useful. A Blasting Chime equipped by at least one melee character will also help. Skeletal Archers and Skeletal Warriors will respawn and you will sometimes see one that is inactive – it can be targeted but not damaged, however the Bone Guardian can still sacrifice these mobs. Kill it quickly, loot the chest and move on.

Choose your puzzle again – giving consideration once more to those that will need to run through the raid to reach the end fight once more after being buffeted off.

The Gravity Room should consume fewer resources, as it contains no enemies, unlike the Red/Green Room. Two players are required any time people need to pass through the Gravity Room, which can present a problem if someone has been knocked off the End Fight courtyard (see notes above).

On reaching the Shrine Room, no one should move from the arrival point until it is confirmed that no existing party members plan to exit/re-enter the raid and no new members are to join the party

Use the Shrine wisely, as it is the only Shrine available

There is no standard set of buffs required for the end fight – Cast Greater Heroism, Blur, Weapon buffs and mass buffs (as available) then go

NB: Due to the number of directions given in the section, compass points are frequently abbreviated, for ease of using instructions fast during the raid: N (North), E (East), S (South), W (West)

The Dragon Tank has responsibility for Aurgloroasa

The Healer role looks after the Dragon Tank and Kuldjargh Kiter

Optionally, a dedicated Blitzer can focus on killing the Skeletal Archers

In this section, part of the group remain in the courtyard with Aurgloroasa (Dragon Side). The rest should get ready to shift to the Shadow Side when they are able to

When Aurgloroasa reaches 50%, DM text appears to say she has dispatched some Shadows

The Shadow Side contains Aurgloroasa's Phylactery

Beyond each Portal there is a small room containing a Phylactery

Once the real Phylactery is destroyed, the shadowy walls in the center of the courtyard on the Shadow Side disappear

Communication is key in this section of the raid, and coordination of Phylactery prep/kill must take place. If every Phylactery room is prepped in one go, it can be done quite fast BUT this depends on numbers and capabilities. While ranged characters may be okay soloing, melees may have a tough time with the shadows. They don't have ridiculous amounts of HP and can be killed off with a slow respawn rate, but that does take some time and this is quite intense. It can be done by using just 1 portal or coordinating 2 until the correct Phylactery is found. As long as people are alive (or can be resurrected), this stage can be repeated until successful. If everyone ends up back on the Dragon Side, without the real Phylactery having been found, you face another Dragon beat down until more shadows spawn.

By the time this stage is finished, there may be quite a few Cult of the Dragon Deathlords in the Dragon Side Courtyard

As soon as the circle of Ward Flames is complete, the Dragon Tank should lead Aurgloroasa into the Center Circle

Once the Lever Pullers (and protection) are in position AND the dragon is prepped and in position, Aurgloroasa can be killed

With Aurgloroasa down, the Kuldjargh, Deathlords and any other trash mobs remaining can be cleared up

Finally, you can collect and enjoy your loot... you've earned it!

Some parts including the end fight is currently bugged. Please note GMs may not be available in certain hours due to the new support hours policy.