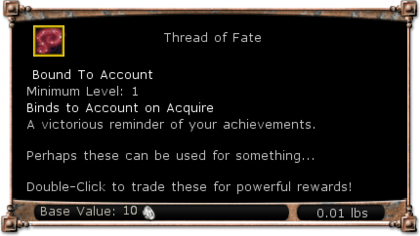 Get threads from end game raids

Thread of Fate is an end-game raid currency introduced in Update 41 as an incentive for players to run a variety of raids at cap, rather than just the few they specifically want gear from. Threads of Fate are Bound to Account on Acquire

You can find Threads in the end chests of at-cap raids, regardless of Tier. They are not passable in-chest, and can go into your Green Bag in stacks of up to 10,000.

Most rewards are available by double-clicking the Threads of Fate in your inventory. 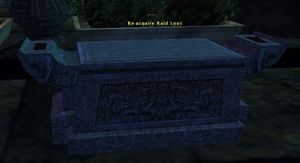 To upgrade old raid gear, use the altar in Halls of Heroes (near the Stormreach teleporter)

The Filigrees introduced in U41 belong to two Filigree Sets, but fit in just one Filigree Slot. They fully stack with all other Filigree, except for themselves or their Rare Version. They have double the standard bonuses for their basic and Rare stats.

Bug: Threads of Fate can behave weirdly if stored in the shared ingredient bank - make sure you have sufficient inventory space to store everything you're removing, or the excess Threads may be deleted.