An Ability Tome is a rare and powerful book that permanently grants an inherent bonus to one or all of a character's ability scores. 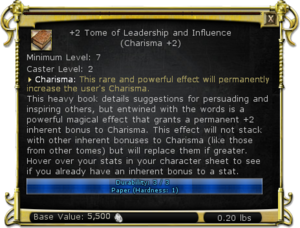 Ability tomes come in seven varieties - one for each Ability, plus one for all abilities: 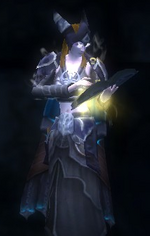 Characters perform a unique animation while reading a tome.

Tomes are items in your inventory. Double-clicking them from a character's inventory will apply them to that character.

Ability tomes are consumed* when used - the book will disappear and the inherent numeric bonus will be permanently added to the appropriate ability on the character's character sheet. This can be seen by mouse-hovering over that ability.

Only the highest value + for a given ability tome will affect your character - the game will not even allow you to use a second tome if you have already consumed one of an equal or greater bonus. If you consume a higher value tome after you have consumed a lower value tome (such as +2 after a +1), the higher value will replace the lower value. Supreme tomes may be consumed if at least one existing value is lower than the supreme tome's value.

Bug: The game is not checking correctly if higher value ability tomes have already been consumed when the character's level is still too low to provide the total bonus obtained. In that case, the lower value tome is consumed and lost.

+6 Tome of Supreme Ability in the DDO Store

Supreme Tomes are available from the DDO Store only, they do not drop in quests. Supreme Tomes are Bound to Account. A +8 Tome of Supreme Ability is included in the 10th Anniversary of Free to Play Launch Bundle.

Once purchased, a supreme tome actually becomes 6 separate tomes, one for each Ability. These 6 tomes can be applied to different character in the same account (since they are all BtA), shuffling them to other characters via a Shared Bank.

Since Update 16, Upgrade Tomes are available in game and from the DDO Store. Upgrade tomes were always bound to account (even if they're replacing an unbound or BtC tome when generated), but since Update 19 they now follow the same bind rules as other tomes (unbound in random gen chests, BtC in Raid chests).

Currently +1, +2, and +3 tomes of all types and +1→+2 and +2→+3 upgrade tomes of all types are permanently available in the store, with +4 and +3→+4 upgrade tomes available during special promotions. +1 and +2 supreme tomes come as a single book, while supreme upgrade "tomes" actually come as a set of six appropriate tomes which are all Bound to Account. You can't buy the supreme upgrade tome with a toon which has already used one of the tomes. In that case you have to switch to another toon, buy the supreme update tomes and trade them via the shared account bank.

Since Update 28 Patch 1, all newly acquired tomes have a minimum level of 1, meaning any character can read and apply any tome of any value. Although the Tome itself can be consumed at any character level, the progressive bonuses (from +1 up to the max represented by that Tome) are applied as the character gains levels.

Since Update 37 Patch 1, the inherent bonuses are applied according to the following table:

A Level 6 character applies a +4 stat tome. That stat will immediately enjoy a +3 bonus, and when the character reaches Level 7, they will enjoy a +4 bonus. If they then immediately apply a "+4-+5" Tome, the +5 bonus will not appear until character level 11, etc.

Note that the effects of a tome (especially Intelligence tomes, re Skill Points) don't apply until after you use the tome - if, for example, you use a +4 INT tome at level 7, you will have two additional skill points at level-up 8 and beyond, but will not receive retro-active skill points "owed" from earlier levels. (This does not hold true during Lesser Reincarnation - see next.)

All Tomes (now) persist through any Reincarnation (including Lesser), and inherent bonuses from tomes will be applied at the appropriate levels above. (In the above example, the consumed +4 tome will have two points applied at L1, a third point at L3, and a 4th at Level 8, every life, present and future.) Since the effect does not apply until they are "in the game" (i.e. Level 1), in the case of Intelligence tomes you get that additional skill point when you take Level 2, but not during Character (re-)Creation. So, if the above example reincarnated, they would not have to wait until level 8 (as they did when they initially applied that tome); the re-created Level 1 character would enjoy the bonuses of all previously existing Tomes, as appropriate to their level (according to the above table), starting at Level 1. (To be clear, they do not have to wait until the same level they previously applied the Tome.)

A tome cannot be applied until after a new character first logs into the game world, so the stat benefit is not available during character creation*. However, once in the game, you gain the benefit and thus qualify for feats.

Reincarnating characters enjoy appropriate benefits from all pre-existing tomes from character re-creation as if they were "Level 1" characters.

(* Some DDO Store or Market offers give accounts a free Tome for every character - that tome will be found in their inventory upon first entering the game world.)

Unwanted tomes can be traded in for Purified Eberron Dragonshard Fragments, a rare item which is highly prized for advanced Cannith Crafting recipes. Speak to any vendor in one of the Crafting Halls, select "Trade Essences", and when the UI pops up drop the tome(s) (one at a time) in the window.

Update 19 changed these values in unknown ways - at least the Ascension Chamber raid's tomes were reduced by one level.