This high summit of the Thunder Peaks is where the Cult of the Dragon has secured the Stone Meridian artifact. 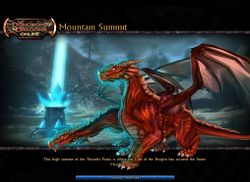 You're determined to deprive Aurgloroasa of her powerful allies, the red dragons Nevalarich and Tharaxata. Go inside the Ruins of Thunderholme and find the stairway to the Mountain Summit to confront the dragons.

When destroyed, the Stone Meridian does explosion damage to nearby players of 2000+.

Again, the dragons need to be kept apart – while they are together or in close proximity they cannot be damaged.