Commonly referred to as the "Fair Folk", Elves are a long-lived people who have populated many places following their retreat from Xen'drik. The stereotypical (and true) physical description of an elf includes large pointed ears; slanted eyes; elegant, angled faces; somewhat short physique, and dark forest-green eyes; finally, most differences between male and female elves are marginal.

Note: In D&D, there are many distinct sub-categories of "Elf"; in DDO (with the exception of Drow, the racial variant Wood Elf, and the Iconic Sun Elf) they are all grouped together by their shared generic racial name "Elf", and no further distinctions are made. Players who wish to think of their Elf character as one or another may wish to distinguish their build as such by choosing a particular skin tone and hair color during character creation.

There is one dragonmark carried by Elves - Mark of Shadow, carried by Houses Phiarlan and Thuranni. 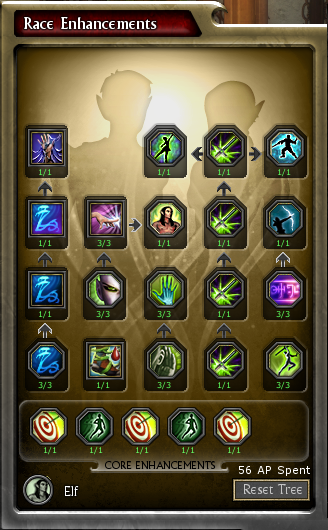 This section deals with Aerenal, Khorvaire, and Valenar elves, which in DDO are all treated as the "Elf" race. Drow elves are treated as a separate race. There are separate pages detailing with background information for the Aerenal elves, Khorvaire elves, and the Valenar elves.

Most elves stand between 5-1/2 to 6-1/2 feet tall and typically weigh a minimalist 95 and 135 pounds. Neither males nor females grow any facial or body hair (exempting hair grown on the head). An elf is considered an adult about 110 years old, and can often live to be well over 700 years old. Elves are often discerned from their widely-recognized large, pointed ears; usually slender limbs or body; slanted, slightly cat-like dark-green/grey eyes (the former being the most common); the sharpness and frailness of bones on their body such as the chin; and finally the uncanny fairness and grace every elf seems to possess.

Elves do not sleep as other races do. Instead they meditate, descending into a trance-like state much like a "waking sleep" that lasts for about four hours each day. Usually 4-hours of meditation rests an elf like 8-hours of sleep would other races.

Many elves will typically let their head-hair grow to a much greater extent than the other races.