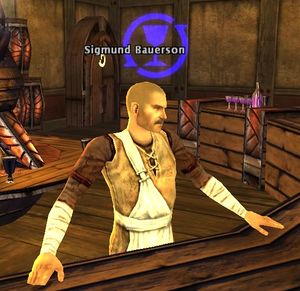 Description: Sigmund Bauerson is the tavernkeeper of Korthos Village; however, he does not conduct business directly with the players, letting his wife, Ingrid, take care of this.

As soon as you arrive on the village, he will be on the tavern, and will tell you the following:

After you complete the three starter quests in the village, he will approach you:

On completion of quest, he will tell you with the following:

After you get your reward, if you talk to him again, he will say: