Long ago the giants trapped an invader from another plane inside these crumbling ruins. 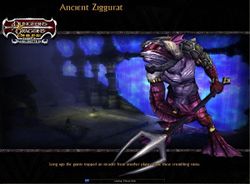 The Sahuagin have enslaved the local Drow to dig up a powerful magic artifact from the ziggurat in the swamp. Enter the ziggurat, free the slaves, and attempt to retrieve the artifact.

Notes: It may be possible to get kill bonuses by farming the respawning sahuagin mage and water elementals in the room with Foxpaw, after flooding the area; 81 kills was not enough. It may also be possible to stealth into the boss room and open the door to the treasure room before killing Slomnuc for additional kills.